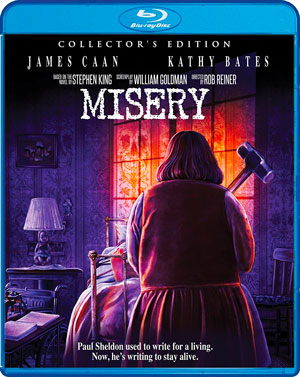 Shout! Factory has just announced details about the upcoming release of a Misery: Collector’s Edition on Blu-Ray Disc through their Scream Factory label, slating it for a November release.

Based on the novel by Stephen King, Misery tells the story of novelist Paul Sheldon who doesn’t remember the blinding blizzard that sent his car spinning off the road. He doesn’t remember being nursed back from unconsciousness. But he will never forget Annie Wilkes.

As Paul (James Caan) recuperates from his injuries in the secluded cabin of his benefactor Annie (Kathy Bates), he begins to discover that beneath the seemingly kind and naive exterior of his self-described “number one fan” lurks a mind that is cunning, unhinged, and bent on keeping her favorite writer as her personal prisoner for the rest of his “cock-a-doodie” life… and Sheldon must engage his savior-turned-captor in a battle of wills that will push them both to the brink.

You will also find the two Commentary Tracks with Rob Reiner and Screenwriter William Goldman, respectively, on the release, culled from previous releases.

And then, there is a host of featurettes, covering virtually any aspect of the story, the subject matter, the characters and the making of the film, including “Misery Loves Company,” “Marc Shaiman’s Musical Misery Tour,” “Diagnosing Annie Wilkes,” “Advice For The Stalked,” “Profile Of A Stalker,” “Celebrity Stalkers,” and “Anti-Stalking Laws”.

The release is rounded out by the movie’s Trailers.

The Misery: Collector’s Edition will arrive in stores on November 28 for $34.95 on Blu-Ray Disc. If you order it directly from Shout Factory, you will even get a free poster and receive the disc two weeks ahead of its scheduled release!