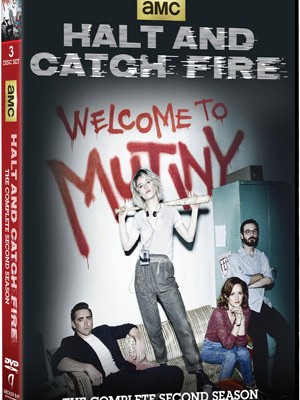 Anchor Bay Entertainment has just unveiled details about the upcoming release of Halt and Catch Fire: The Complete Second Season, bringing the TV show to DVD in August. Much to our dismay, no Blu-Ray version has been scheduled!

The sophomore season of AMC’s hit tech-centered drama “Halt and Catch Fire” hits the ground running. It’s March 1985. More than a year has passed since Joe MacMillan (Lee Pace) set fire to a truck full of Cardiff Giant PCs, the last in a long string of destructive acts that burned the people that made the machine possible: Gordon Clark (Scoot McNairy), Donna Clark (Kerry Bishé), Cameron Howe (Mackenzie Davis) and John Bosworth (Toby Huss).
The Giant is about to go the way of the dinosaur, like any number of personal computers to enter the market in the wake of IBM. The lesson is harsh but clear: in history, only the truly disruptive ideas are destined to matter.
Season two of “Halt and Catch Fire” thrives on the spirit of innovation and takes on world-changing scenarios, no matter the risk.

The 3-disc DVD set will include all 10 episodes that make up the second season, along with a series of Featurettes, such as Inside “Halt and Catch Fire”, “History of Now,” “Joe’s Strategic Benchmarks,” “Tour of An ‘80s Startup” and a Set Tour with Lee Pace and Scoot McNairy.

“Halt and Catch Fire: The Complete Second Season” will be in stores on August 9 for $44.98. As we mentioned in the opening, no Blu-Ray version has been scheduled, which should reason enough for you to write to Anchor Bay and express your displeasure.