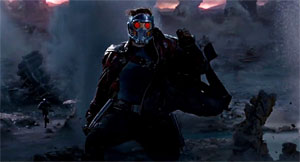 As Marvel continues to produce more films based on is superhero franchises, expanding its reputation for quality entertainment, it is not always easy to look beyond the big names such as Iron Man, Thor and the Hulk. Certainly, the anti-heroes that went on to become the “Guardians of the Galaxy” were not exactly topping the list of candidates. And yet, Marvel managed to create a film that exceeded expectations and became a self-deprecating look at the genre, much in the same way the comic books the film is based on, did. Buena Vista Home Entertainment Has now prepared a Blu-Ray version of the movie and I was very eager to check it out.

Peter Quill is a heartbroken child when his mother dies from disease, and without the opportunity to mourn he passing, the young boy is kidnapped by a group of space-traveling alien mercenaries. As he grows up, he learns the ways of these space rogues and becomes a fortune seeker of his own, which makes him a wanted man, both by the law and certain criminal elements.

One day Quill (Chris Pratt) retrieves a strange orb that he was hired to find, but instead of delivering it to his client, Quill is trying to sell it off on his won. With a bounty on his head, he is promptly caught and thrown behind bars on a prison space ship. Cooped up with a group of other criminals, including the bounty hunters who tired to catch him, Rocket (Bradley Cooper) and Groot (Vin Diesel), as well as the assassin Gamora (Zoe Saldana), and the revenge-driven muscle Drax (Dave Bautista), Quill soon realizes that the only way out of the prison is with the help of this rag-tag team of criminals. 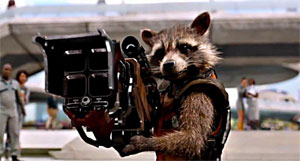 They hatch a plan, well not so much as a plan, more of an idea, really, and succeed in their breakout, but as soon as the group tries to find out what is so special about the orb, Ronan the Accuser (Lee Pace), a power-hungry despot, is on their heels, trying to rip it from their hands. Since everyone in the group has a score to settle with Ronan, Quill and his companions realize hat they may have more in common than they originally believed, and they band together to destroy Ronan and save the galaxy in the process, for the power that lies within the orb is enough to destroy entire planets with a single touch. Never could they allow Ronan to get possession of the orb. And just like that he snatches it from them…

Anti-heroes are cool. Always will be. There is a certain fascination about characters that are on the wrong side of the law but prove that they are not actually malicious but do indeed care for the greater good. They become even better when they have a relatable history and motivations. If you throw a group of such characters together, in the right hands you have a winning formula, and “Guardians of the Galaxy” is living proof of that. 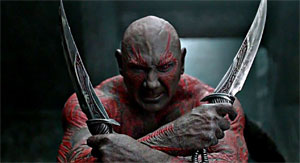 Never taking itself to seriously, the film is poking fun at the superhero genre. It takes its clichés, toys with them and spits them out on the other side with a wicked sense of humor, and it provides the characters with wonderfully entertaining moments. However, it is important to understand that “Guardians of the Galaxy” is never just silly and never just goofy. The world is very serious and so are the characters themselves, for the most part. When they say something funny, it is not because the writer had a joke and wanted to work it into the scrip by all means necessary, but because the character really feels that way. When Drax is a little slow on the uptake it is funny because he is slow on the uptake, and not because he is superficially stupid at that moment. When Rocket comes across as reckless, it is because he is young and reckless, and always runs his mouth like the teenager that he essentially is, feeling entirely indestructable.

It is this sincerity that makes the characters in “Guardians of the Galaxy” so much more relatable and a great deal more enjoyable than a goofy cartoon. 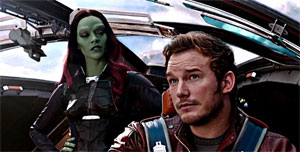 The same is true for the villains in the film. Ronan is definitely imposing, and you can feel the menace oozing from him, but so is Nebula (Karen Gillan), Gamor’s step-sister and Ronan’s right-hand hench-girl. These characters are simply fun to watch, and you want to know more about them as you observe their actions. It gives the film the depth that is necessary to lift “Guardians of the Galaxy” head and shoulders above cheap comic knock-offs and puts it on a superhero-adaptation pedestal all of its own.

This is not Tony Stark quipping, this is not Thor battling for righteousness, it is not the Hulk fighting his inner demons. This is a rag-tag bunch of characters who couldn’t care less whether they die today or tomorrow, because it’s all been good by their own standards.

Buena Vista Home Entertainment is presenting “Guardians of the Galaxy” as a pristine 1080p high definition presentation. Since most of the film has been prepared in the digital realm, it is hardly surprising that the transfer is meticulously clean and revels in detail and color in every single frame. The beautiful production design and cinematography helps also, and the deep black levels firmly root the image and give it visual depth. 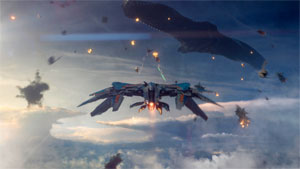 The audio on the track is presented as a massive DTS 7.1 HD Master Audio track that is wall-to-wall surround. Every moment of the film is filled with spatial effects, making incredible use of all channels. The frequency response is wide with a solid bass extension that is powerful enough to perfectly reproduce the scale of some of the film’s scenes.

Dialogues are well integrated and always understandable, without ever being drowned out by the sound effects or the bombastic action. The music also blends well in the mix with a beautifully wide sound stage for the orchestral pieces and a solid full-bodied presentation of the 70s-infused music pieces that give the film its unique, and extremely pleasant, sonic character.

The release is packed with bonus materials, and you will find countless featurettes on the disc, covering the production of the film and the visual effects. With so many non-human characters in play that had to be entirely computer generated based on human performances, or Serkissed as we like to call the process, a good portion of these supplements is dedicated to behind the scenes footage and discussion of this process.

A commentary track by director James Gunn is also included on the disc, offering up plenty of insight into the production, and a number of deleted scenes, also with commentary track, give you a glimpse at scenes that didn’t quite make it.

The Gag Reel that is includedon the release will definitely make you smile over the flubs the actors made and tried to recover from, and for those who can’t wait, the release also includes a peak at the upcoming “The Avengers: Age of Ultron” movie in splendiferous high definition.

From the moment you insert the disc and hear Blue Suede’s “Hooked on a Feeling” over the disc menus, you will dive into the mood of the movie and get hooked. It is a wonderful movie, an homage to the superhero genre of sorts, with a cool set-up and awesome characters. The release is everything you could have hoped for, so do not wait. Get your copy now!