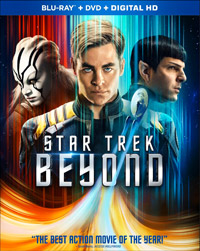 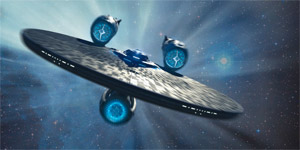 Packed with more action than any Star Trek production before, Star Trek Beyond, over the past years, the franchise has evolved from thought-provoking science fiction to popcorn-popping mainstream entertainment that leaves most of its roots behind. Paramount Home Entertainment has now released Star Trek Beyond on Blu-Ray Disc and I was eager to visit the film once again, after watching it in theaters with somewhat mixed feelings.

Deep in outer space, the U.S.S. Enterprise is docked at Yorktown spaceport when messages arrive about escape pods being rescued in a nearby nebula. Kalara (Lydia Wilson), the only survivor, asks for help to rescue her remaining people who were stranded on the planet Altamid in the uncharted territory deep inside the nebula. Enterprise is dispatched to rescue Kalara’s crew but as soon as they enter the nebula, the crew members of the Enterprise find themselves overwhelmed by an ambush that destroys the ship and leaves everyone stranded on the hostile planet Altamid as well. What follows is not only a struggle for survival but also a desperate attempt to escape the planet and return to Yorktown. 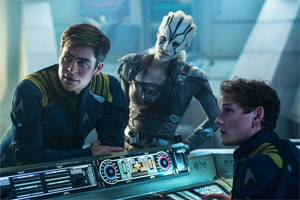 Despite its overblown, big-budget production, in comparison to previous Star Trek movies, Star Trek Beyond feels somehow small. The story is surprisingly “unepic,” firmly planting the vast majority of the plot on a single planet with a limited cast of characters. The segments taking place in Yorktown do little to diminish that impression as the story, essentially revolves around no more than a handful of characters in a limited setting. This is not a bad thing, per se—after all, the Original Series was almost entirely small-scope—but since we have gotten so used to Star Trek expanding its scope over the past decades, it was a surprise to find a story that felt so limited. Or, perhaps, we should simply look at the movie as an expanded Original Series episode where characterizations and personal conflict took center stage. 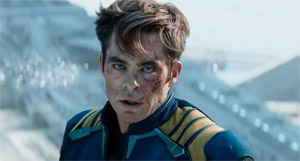 Because when it comes right down to it, Star Trek Beyond is actually pretty good. The intimacy of the story works to its benefit and makes the movie appear decisively less conceited than the epic spectacles that the past two films represented. I thought it was a nice switch and gave the cast the opportunity to add layers and facets to their characters, making it possible to even add dimension to entirely new characters, such as Jaylah (Sofia Boutella), during the course of the film. It is a nice departure from the shallow approach that Hollywood’s summer movies have taken in recent years.

Make no mistake, though. Despite all of this, the film never shies away from bombast and it is loaded with action sequences so furiously fast that they will pin your ears flat to the sides of your head. Whether it is the opening destruction and gutting of the U.S.S. Enterprise, or the climactic battle towards the end of the film, there is not a moment without things happening. Star Trek Beyond has it all, including major cast members being wounded and impaled in battle or by accident, science experiments going awry, tech wizardry and skirmishes on an alien planet. It is a dream for every Trekkie and for anyone looking for some action-loaded entertainment. 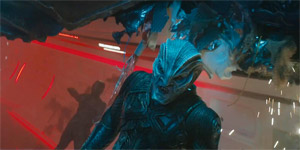 The movie also boasts beautiful cinematography throughout. From mesmerizing outer space imagery to intimate shots on an alien planet, the filmmakers make the most of the tools at their disposal and conjure up images that entirely belie their digital origins. Everything feels cohesive and pulls the viewer in, never letting go until the final frames of the closing credits.

With the returning cast from the past two films, the crew of the Enterprise is now an established unit and the chemistry among the cast members works right away. Without requisite origin stories in the way, and without the need to introduce or explain the dynamics among the characters, players like Chris Pine, Zachary Quinto, Karl Urban, Zoe Saldana, John Cho, Anton Yelchin and Simon Pegg can instantly pick up on their lovable quibbles and quarrels and bring the world to life in a few mere seconds, freeing up valuable screen time to the telling of the story rather than preliminaries. 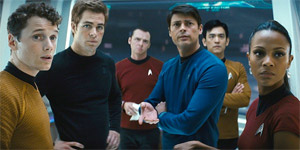 Arriving on a Blu-Ray Disc, Paramount Home Entertainment dishes out a spectacular presentation of Star Trek Beyond here with a transfer that is absolutely breathtaking. With bold blacks that create immense visual depth and strong colors that faithfully reproduce every hue in the visible light spectrum, it appears, viewing Star Trek Beyond is pure candy for the senses. It is beautiful. It is rich. It is incredibly detailed. It is razor sharp. It is vibrant. It is everything we ask for in a modern movie production and subsequent release, made possible by the treatment of the movie as a whole, entirely in the digital domain. In short, it is the perfect showcase for any home theater and will impress even the most demanding viewers. Too bad I did not have access to the 4K UHD version of the release to be able to evaluate its full potential.

The same holds true for the audio presentation. The Dolby Atmos track that accompanies the movie is—please excuse the pun—truly stellar. With clear high ends and dialogues that are perfectly mixed and always understandable, the film also boasts and an incredible bottom end to drive home the action and to create a brooding atmosphere when required. Surround channels are in constant use and bombard viewers from all directions, making for a sound mix that is as active and aggressive as anything you see on the screen. 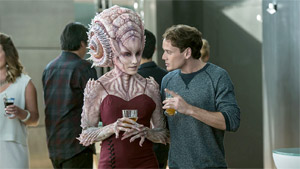 The Blu-Ray Disc comes with a number of bonus features, including a selection of deleted scenes and a handful of featurettes that cover various aspects of the movie, its legacy and background, as well as its cast and production.

Among these featurettes is also a touching tribute to actors Leonard Nimoy and Anton Yelchin, both of whom sadly passed away during the making of the film.

Star Trek Beyond is exciting and entertaining and it is incredibly cool. Loaded with never-ending thrills and a story that is in the true spirit of the Star Trek franchise, it is a movie you do not want to miss out on. Grab your copy now!