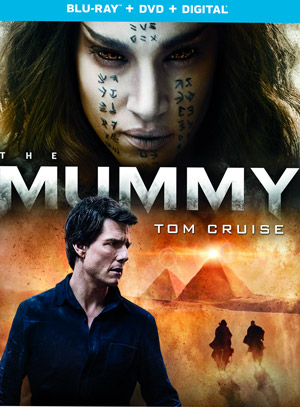 Universal Pictures Home Entertainment has just announced the upcoming release of The Mummy, scheduling a 4K UHD, Blu-Ray and DVD version for September.

Thought safely entombed deep beneath the desert, an ancient princess (Sofia Boutella) whose destiny was unjustly taken from her is awakened in our current day. Her malevolence has grown over millennia and with it come terrors that defy human comprehension. Tom Cruise battles the ultimate evil in a breathtaking version of the legendary and mystical monster that has captivated and terrified humankind for centuries from the sands of the Middle East through modern-day London.

The release will offer more than one hour of bonus content, including a Commentary Track with director and producer Alex Kurtzman, and cast members Sofia Boutella, Annabelle Wallis and Jake Johnson and Deleted and Extended Scenes, as well as a number of Featurettes, such as Cruise & Kurtzman: A Conversation Rooted in Reality and Rooted in Reality, in which the filmmakers and cast reveal how they broke away from old tropes and traditions to create a dynamic and realistic 21st century monster movie.

Life in Zero-G: Creating the Plane Crash invites you to watch Tom Cruise, Annabelle Wallis, and the crew shoot the incredible plane sequence, while in Meet Ahmanet, Sofia Boutella shares the excitement of reinventing a monster icon.

Cruise in Action offers a behind-the-scenes look at Tom Cruise’s most memorable Mummy stunts, whereas Becoming Jekyll and Hyde gives you the opportunity to find out how the casting of Russell Crowe brought a bold new dimension to the roles of Jekyll and Hyde.

In Choreographed Chaos, watch as cast and filmmakers create an epic outdoors clash between ancient and modern worlds. Nick Morton: In Search of a Soul is a look at Tom Cruise describing what drew him to play a man seemingly without a soul.

Also included is Ahmanet Reborn Animated Graphic Novel, in which you can witness Ahmanet’s descent into the monstrous underworld as she is reborn into the Goddess of Chaos and Wrath.