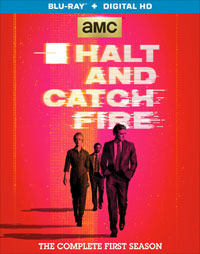 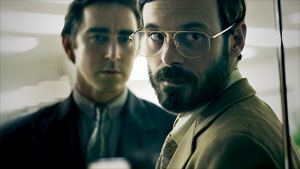 For some reason, I had never heard of AMC’s television show “Halt and Catch Fire” until Anchor Bay Entertainment sent me a Blu-Ray copy for review. As soon as I had read the show’s description I just knew that I had to watch it.

1983 was the year when the world changed, it was the year when computers finally broke out of the business environment and both home computing exploded, and the PC landscape changed in such a way that innovation and imagination explored new opportunities. This is the time during which “Halt and Catch Fire” takes place. 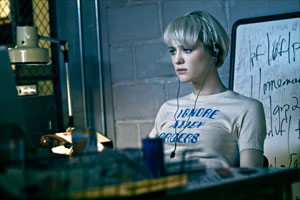 Joe MacMillan (Lee Pace) is a visionary executive and he leaves IBM because he feel stifled by the company’s rigid structure and its tunnel vision. He joins Cardiff Electric, a small Texas company specializing on selling mainframe computers and software to business clients. There, he joins forces with Gordon Clark (Scoot McNairy) who has a dream of building his own computer. With some politicking the two force the company into a position to pursue building an IBM clone and change their business, but making sure the computer will be way ahead of its competition, making it fast and cheaper than anything in the market.

With the help of Cameron Howe (Mackenzie Davis) and a team of engineers, the set out to build this marvelous machine, but the way to success is fraud with problems, least of which is the shrinking money reserves the company can tap into. Egos collide, the project sees setbacks and people melt down under the growing pressure, but Joe never gives up on his idea, his vision. He is determined to present their new computer at COMDEX in Las Vegas ahead of all competitors to revolutionize the industry and build a new future for the company, himself and the world. 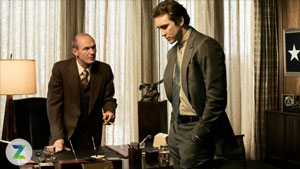 Since the show depicts a time period through which I went myself, working in the same industry, naturally “Halt and Catch Fire” was exceedingly exciting for me to watch. Just like the characters in the film I was breathing this kind of stuff back then as I entered the computer games industry, working on the bleeding edge of both hardware and software. Part of the intrigue is, of course, to see it all come back to life, and the creators of the show did a great job in terms of authenticity. While there are a few minor glitches-Cameron’s work practices are really just a complete stereotype-for the most part things seem credible and even the code snippets you will see flicker across the screen do make sense, except you do not have access to DOS functions when writing BIOS code. Minor quibbles in the overall picture… 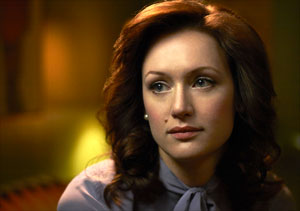 Lee Pace is, without a doubt, the star of the show and I would be surprised if we won’t see a lot more of him in the coming years. His persona is driven, larger than life, his ego is bigger than anyone else’s, his balls are made of steel not brass, and his vision is unshakable. He conjures up memories of Steve Jobs, without ever consciously trying to remind us of Jobs. Scoot McNairy is also the perfect pick for the engineer Gordon who is dogged in his determination to get his computer built, emotionally abandoning even his family in the course of it—although it is his wife Donna (Kerry Bishé) who saves his hide on occasion when she applies her own engineering knowledge to the problem.

I also enjoyed Mackenzie Davis’ portrayal of Cameron, even though he character is really a stereotype template, as I mentioned before. A complete slob who is spending more time procrastinating than coding, she is the doe-eyed idealist fresh out of university who may represent the future, but is full of illusions about the realities of real business life. As such she comes across as rebellious compared to the more corporate types, while at the same time being the most vulnerable of characters because her thin skin does not allow for disappointment. 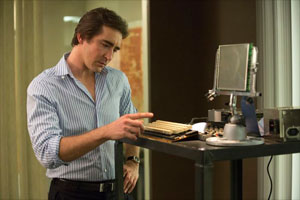 The production is perfectly capturing the era. From gaudy interiors to bad hair and beards, all the way to the clothing and the music, the show captures it all nicely, including Cameron’s bad taste in music.

Anchor Bay Entertainment is presenting “Halt and Catch Fire” in a beautiful 1080p high definition version on this Blu-Ray release in the show’s 1.78:1 aspect ratio. Colors are rich and vivid, while deep black levels give the image visual depth and create solid shadows. This is important as it helps give the show its distinctive early-80s look. Skin tones are perfectly rendered and the image revels in detail throughout, bringing out even the smallest detail in the production. 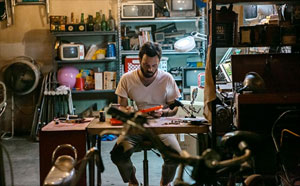 The release comes with a Dolby Digital TrueHD audio track that nicely accompanies the presentation. The show is not aggressive in terms of surround usage, but nonetheless, the discrete surround channels are engaged frequently and effectively for ambient effects. The mix is balanced, with good low end response and clear high ends. Dialogues are well integrated and always understandable, ensuring a quality viewing experience throughout.

The 3-disc release also includes a few bonus features, including promo featurettes, and a behind-the-scenes look, all with plenty of cast and filmmaker interviews.

“Halt and Catch Fire” is not a perfect television show. It lacks a bit of suspense/drama at times making it feel, not sluggish, but a bit slow here and there. Nonetheless, I found myself unable to just turn off the show once I started watching. I always had to go for just one more episode, and combined with the intriguing setting and storyline, that’s quality entertainment for me, especially because I was able to completely connect with the show. Check it out!