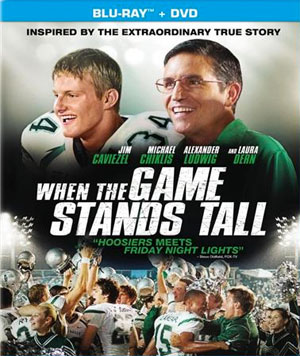 Sony Pictures Home Entertainment is bringing the life story of legendary football coach Bob Ladouceur to home video in the inspiring sports drama When the Game Stands Tall, releasing the movie on Blu-Ray Disc and DVD in December.

Inspired by a true story, “When the Game Stands Tall” tells the remarkable journey of legendary football coach Bob Ladouceur (Jim Caviezel), who took the De La Salle High School Spartans from obscurity to a 151-game winning streak that shattered all records for any American sport. When the streak is broken, and tragedy strikes the team, Coach Lad must teach his players – and the entire town – that it’s not about how you fall, but how you get back up.

The DVD Version of the movie will feature a Commentary Track by Director Thomas Carter, along with the Making-of Featurette ”Undefeated” that will give you a behind-the-scenes look at the challenges, excitement and triumphs of filming.

The Blu-Ray version will also feature the Commentary Track and the ”Undefeated” Featurette, but will also include Six Deleted and Extended Scenes, as well as the Featurettes “Gridiron Action”, offering up a look at the dynamic approach filmmakers took to stage & film the exciting football sequences, and ”The Heart and Soul of a Program” giving you a peek at the man behind the De La Salle Football Program.