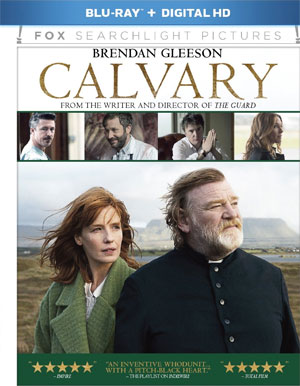 Brendan Gleeson stars in this darkly comic tale of murder and morality from acclaimed writer-director John Michael McDonagh (The Guard). Father James (Gleeson) is a good priest who feels sinister forces closing in after being threatened by a mysterious parishioner. As he continues to comfort the troubled members of his community, including his own fragile daughter (Kelly Reilly), Father James begins to wonder if he will have the courage to face his own personal Calvary.

Not available on DVD, the title will be released only on Blu-Ray Disc and will feature a 1080p high definition transfer of the film in its 2.35:1 widescreen aspect ratio, accompanied by a DTS 5.1 HD Master Audio track.

As extras the disc will also contain the Featurettes ”Behind the Scenes,” “The Role of a Good Priest,” “A Matter of Faith” and ”A Father & His Daughter”.

“Calvary” has been scheduled for release on December 9 and can be yours for $27.99 on Blu-Ray with a DigitalHD version.