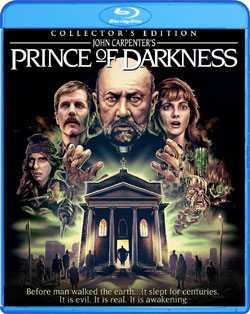 We just learned that Shout! Factory will be releasing another John Carpenter classic on Blu-Ray Disc this fall. After bringing you “They Live!” and The Fog, ” the independent publisher now brings you Prince of Darkness in high definition.

A group of graduate students and scientists uncover an ancient canister in an abandoned church, but when they open the container, they inadvertently unleash a strange liquid and an evil force on all humanity. As the liquid turns their co-workers into zombies, the remaining members realize they have released the most unspeakable of horrors, Satan himself, thus paving the way for the return of his father-the all-powerful anti-God.

Terror mounts as the last two members of the team must fight to save an innocent world from a devilish fury that has festered for over seven million years.

At this time we have no detailed specs on the release yet, but expect a release that mirrors the previous John Carpenter releases in terms of quality and content. Sadly we can‘t comment on those either, as we have not been able to review any of these titles.