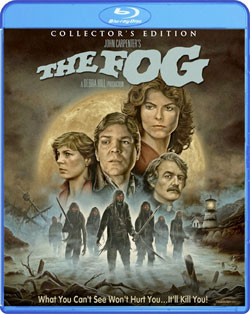 Fans of John Carpenter‘s atmospheric ghost story will be pleased to hear that The Fog is finally heading to Blu-Ray Disc this summer, courtesy of Scream Factory.

“The Fog” is the iconic 1980 supernatural thriller by legendary filmmaker John Carpenter, featuring the spooky and atmospheric tale of a Northern California coastal town under siege by dead souls back for revenge. THe movie is highly regarded by both fans and critics as one of the true classics of the horror genre of the era, boasting an all-star cast that includes Adrienne Barbeau, Jamie Lee Curtis, Janet Leigh, Tom Atkins, John Houseman, and Hal Holbrook.

Coming to Blu-Ray for the first time in the US, this definitive collector‘s edition release of “The Fog” features a new transfer of the film in 1080p high definition, supervised by the film‘s OscarÂ®-nominated cinematographer Dean Cundey. The release will contain all the bonus materials from the previous MGM Home Entertainment DVD release, including the Commentary Track with Writer/Director John Carpenter and Writer/Producer Debra Hill, as well as Outtakes and a Photo Gallery. Also culled from the DVD are the Featurettes “Tales From The Mist,” “Fear on Film: Inside The Fog” and ” The Fog: Storyboard To Film.

In addition, this Blu-Ray release will also contain new bonus materials, such as an Exclusive interview with Actress Jamie Lee Curtis, discussing “The Fog” and covering her legendary early 80s “Scream Queen” career.

You will also find a New Audio Commentary on the release, featuring Actress Adrienne Barbeau, Actor Tom Atkins and Production Designer Tommy Lee Wallace, as well as a Retrospective Interview with Director of Photography Dean Cundey about his many legendary collaborations with John Carpenter.

Horror‘s Hallowed Grounds will also be included, giving you a look at the film‘s locations with host Sean Clark.

We should also mention the new cover art for the title, which has been commissioned specifically for this release. Fans of the film can get a limited-run 18”x24” poster of the artwork for free if they order the Blu-Ray Disc or DVD directly from ScreamfactoryDVD.com.