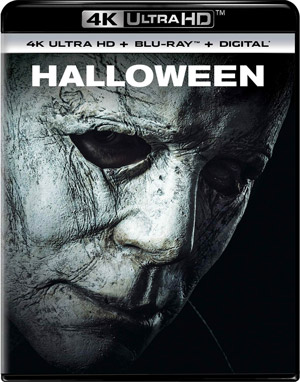 Universal Pictures Home Entertainment has just added the new Halloween to its line-up, scheduling the latest film in the franchise for release on 4K UHD, Blu-Ray Disc and DVD in January.

Forty years after the events of 1978’s Halloween, Laurie Strode (Jamie Lee Curtis) now lives in a heavily guarded home on the edge of Haddonfield, where she’s spent decades preparing for Michael’s potential return. After being locked up in an institution, Myers manages to escape when a bus transfer goes terribly wrong, leading to chaos in the same town he preyed on decades earlier. Laurie now faces a terrifying showdown when the deranged killer returns for her and her family—but this time, she’s ready for him.

The release will come packed with bonus features, including a selection of Deleted and Extended Scenes, including Extended Shooting Range, Shower Mask Visit, Jog to a Hanging Dog, Allyson and Friends at School, Cameron and Cops Don’t Mix, Deluxe Banh Mi Cops and Sartain and Hawkins Ride Along.

Also included are a host of Featurettes, such as Back in Haddonfield: Making Halloween, The Original Scream Queen, The Sound of Fear, Journey of the Mask and The Legacy of Halloween.