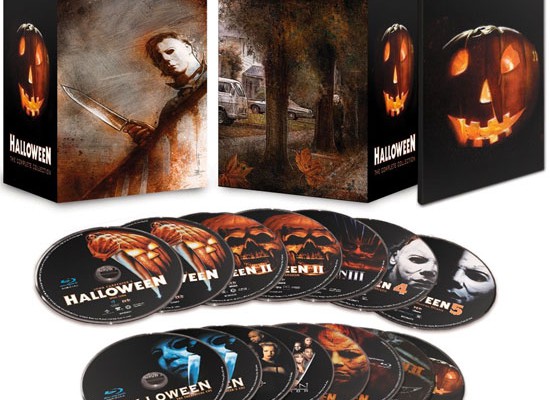 In a collaboration that gives them access to all films in the franchise, Anchor Bay Entertainment and Scream Factory have announced a 15-disc Blu-Ray Collection that will contain all Halloween films in a single box set.

John Carpenter’s Halloween, for example, will contains a transfer supervised and approved by cinematographer Dean Cundey, as well as a New Audio Commentary with Director of Photography Dean Cundey, Editor Tommy Lee Wallace And The Shape, Nick Castle. But there’s more, you will also find a Commentary Track with Co-Writer/Director John Carpenter and Actress Jamie Lee Curtis on the release, as well as the Featurettes “The Night She Came Home,” “On Location: 25 Years Later” as well as TV Version Footage, Television Spots, Theatrical Trailer and TV and Radio Spots.

In addition, one disc, featuring the Deluxe Edition of “Halloween” will also contain an Audio Commentary with Co-Writer/Director John Carpenter, Actress Jamie Lee Curtis and Co-Writer/Producer Debra Hill, along with the Featurette ”Halloween: A Cut Above The Rest” and Theatrical Trailer and TV and Radio Spots.

Halloween II will also be included in two versions in the set, featuring the Theatrical Cut of the film, as well as the TV Cut. The film will be accompanied by a Commentary Track with director Rick Rosenthal and actor Leo Rossi, an Audio Commentary with stunt co-ordinator/actor Dick Warlock, Deleted Scenes and an Alternate Ending, as well as the Featurettes “The Nightmare Isn’t Over: The Making Of Halloween II”, featuring Rick Rosenthal, Lance Guest, Dick Warlock, Alan Howarth, Dean Cundey, Leo Rossi and others.

In “Horror’s Hallowed Grounds: The Locations of Halloween II”, host Sean Clark revisits the original shooting locations of the film. Also included to support the movie are Theatrical Trailer, TV and Radio Spots and a Still Gallery.

Halloween 4: The Return of Michael Myers will feature an Audio Commentary with Actors Ellie Cornell and Danielle Harris, and a Commentary Track with Director Dwight H. Little and Author Justin Beahm, along with the Theatrical Trailer.

Things get interesting again with Halloween: The Curse of Michael Myers, which will be presented in its Theatrical Cut, complete with Theatrical Trailer, TV Spots and a Still Gallery. In addition, the film will be presented in the Producer’s Cut with countless new bonus features. As such, look for a new Audio Commentary with Screenwriter Daniel Farrands and Composer Alan Howarth, the new Featurette “Jamie’s Story”, featuring an Interview With The Original “Jamie” Actress Danielle Harris, as well as “The Cursed ‘Curse’”, a new Interview with Producers Malek Akkad and Paul Freeman.

Rob Zombie’s Halloween will feature the Unrated Director’s Cut With Audio Commentary By Writer/Director Rob Zombie as well as Deleted Scenes, Alternate Ending, Bloopers and the Featurettes ”The Many Faces Of Michael Myers”, “Re-Imagining Halloween,” “Meet The Cast,” “Casting Sessions” as well as the Scout Taylor-Compton Screen Test and the Theatrical Trailer.

The 4.5 hour Documentary “Michael Lives: The Making of Halloween” will also be included in the Deluxe Edition of the set.

The Deluxe Edition will also contain another disc with bonus materials, such as John Carpenter’s Halloween – The Extended Version, in high definition, in which the TV Inserts are in Standard Definition, as well as an Interview with Moustapha Akkad about origin of “Halloween.”

This disc will be rounded out by Photo Galleries for Halloween, Halloween 4 and Halloween 5.