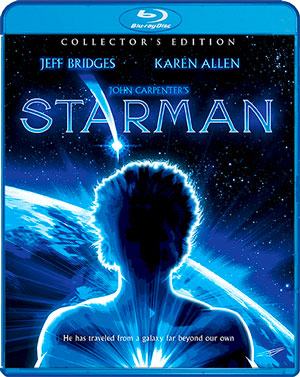 Scream Factory is once again presenting a fan favorite this winter, this time announcing filmmaker John Carpenter’s romantic science fiction odyssey Starman, starring Jeff Bridges as an innocent alien from a distant planet who learns what it means to be a man in love. The Blu-Ray Collector’s Edition will arrive in December.

When his spacecraft is shot down over Wisconsin, Starman (Jeff Bridges) arrives at the remote cabin of a distraught young widow, Jenny Hayden (Karen Allen), and clones the form of her dead husband. The alien convinces Jenny to drive him to Arizona, explaining that if he isn’t picked up by his mothership in three days, he’ll die. Hot on their trail are government agents, intent on capturing the alien, dead or alive. En route, Starman demonstrates the power of universal love, while Jenny rediscovers her human feelings for passion.

The release will also feature a number of great bonus features, including a Commentary Track with director John Carpenter and Jeff Bridges.

Further, the disc will contain a Vintage Featurette, TV Spots and Trailers as well as a Still Gallery.

Starman has been scheduled for release on December 18 for $34.98. Or you can order your copy directly from Shout Factory and also get a free poster along with the release.