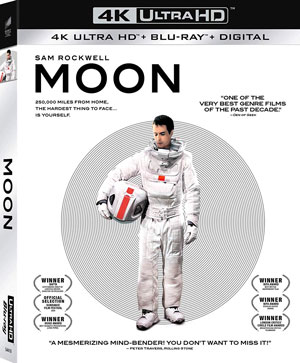 Sony Pictures Home Entertainment has added a brand-new 4K Ultra HD version of the 2009 sci-fi classic Moon to its roster ,scheduling the release for mid-July.

Sam Bell (Sam Rockwell) is nearing the completion of his 3-year-long contract with Lunar Industries, mining Earth’s primary source of energy on the dark side of the moon. Alone with only the base’s vigilant computer Gerty as his sole companion, Bell’s extended isolation has taken its toll. His only link to the outside world comes via satellite messages from his wife and young daughter. He longs to return home, but a terrible accident on the lunar surface leads to a disturbing discovery that contributes to his growing sense of paranoia and dislocation so many miles away from home.

Among them, you will find a Retrospective Conversation between Writer/Director Duncan Jones and entertainment journalist Joe Utichi, as they reminisce about the making of the movie. A selection of Never-before-seen Deleted Scenes will also be included, along with a Gallery of unique and compelling fan art posters, reflecting the film’s passion-driven cult status.
Also included are bonus features from previous releases of the film, including two Commentary Tracks, the Short Film, Whistle by Duncan Jones, a Making of Featurette and a Visual Effects Featurette, as well as Q&As