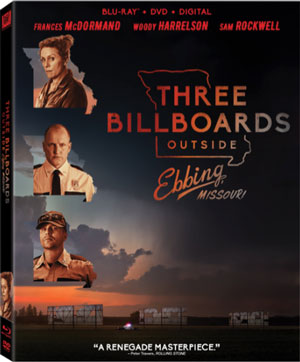 Award-winning actress Frances McDormand delivers a stunningly powerful performance in this darkly comic drama that has been hailed as one of the year’s best films. A murdered girl’s defiant mother (Frances McDormand) boldly paints three local signs with a controversial message, igniting a furious battle with a volatile cop (Sam Rockwell) and the town’s revered chief of police (Woody Harrelson).

Coming in a little slim on the bonus features, the release will only feature the Featurette “Crucify ‘Em: The Making of Three Billboards” and the Short Film ”Six Shooter”. No other bonus features have been announced.