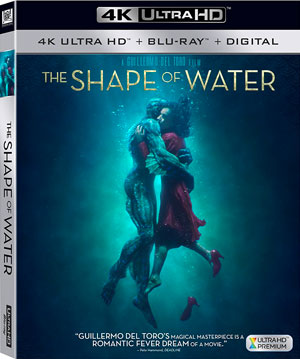 From master storyteller, Guillermo del Toro, comes The Shape of Water, an otherworldly fairy tale set against the backdrop of Cold War-era America circa 1962. In the hidden, high-security government laboratory where she works, lonely Elisa (Sally Hawkins) is trapped in a life of isolation. Elisa’s life is changed forever when she and co-worker Zelda (Octavia Spencer) discover a secret classified experiment.

The release will feature the movie itself with a DTS-HD Master Audio track and will also contain a few select supplements. Among these bonus features is the Featurette ”A Fairy Tale for Troubled Times”, as well as two Anatomy of a Scene Featurettes for the movie’s Prologue and The Dance.

”Shaping the Waves” is a conversation with artist James Jean that is also included, along with Guillermo del Toro’s Master Class.

The release is rounded out by the movie’s Theatrical Trailers.