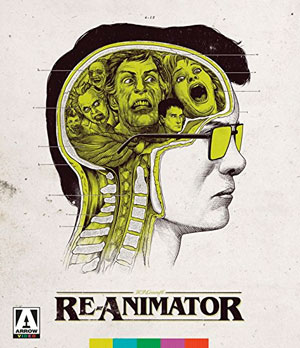 When medical student Dean Cain (Bruce Abbott) advertises for a roommate, he soon finds one in the form of Dr. Herbert West (Jeffrey Combs). Initially a little eccentric, it some becomes clear that West entertains some seriously outlandish theories—specifically, the possibility of re-animating the dead. It’s not long before Dean finds himself under West’s influence, and embroiled in a serious of ghoulish experiments which threaten to go wildly out of control…

One of the most wildly popular horror movies of all-time, Stuart Gordon’s enduring splatter-comedy classic Re-Animator returns to Blu-ray in a stunning version that has been restored in 4K. But what’s more, the release will include the 86-minute-long Unrated version of the movie in 1080p with its original Stereo 2.0 and 5.1 Audio, as well as the 105-minute Integral version, exclusive to this Limited Edition.

The release also includes a Collector’s Booklet featuring new writing on the film by writer Michael Gingold, as well as the original 1991 Re-Animator Comic Book adaptation, reprinted in its entirety.

Naturally, the release will be packed with bonus features. On the first disc, featuring the Unrated version, you will find an Audio commentary with director Stuart Gordon, an Audio commentary with producer Brian Yuzna, actors Jeffrey Combs, Barbara Crampton, Bruce Abbott, and Robert Sampson, as well as Deleted and Extended Scenes.
Also included is the Documentary Re-Animator Resurrectus, featuring extensive interviews with director Stuart Gordon and producer Brian Yuzna, writer Dennis Paoli, composer Richard Band. It also includes a Music Discussion with composer Richard Band, an Interview with former Fangoria editor Tony Timpone, and Barbara Crampton In Conversation, in which the Re-Animator star sits down with journalist Alan Jones for this career-spanning discussion.
Trailer & TV Spots will complete this disc.

On the second disc of the set, you will find the Integral Version along with A Guide to Lovecraftian Cinema, a brand new featurette looking at the many various cinematic incarnations of writer H.P. Lovecraft’s work.