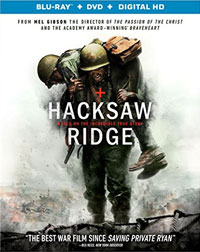 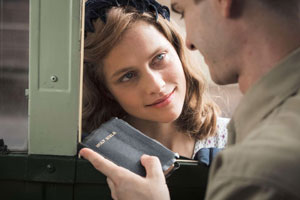 World War II is a boundless trove of stories, filled with raw emotions and heroics, and it is hardly surprising that every few years a filmmaker decides to tell a story before this background to remind us of the humanity and inhumanity of war. Today, perhaps, this reminder might be more important than it has been for a long time.

Directed by Mel Gibson, Hacksaw Ridge is the story of Desmond Doss (Andrew Garfield), a young man from the Virginia countryside who grew up under the shadow of his father (Hugo Weaving), a drunkard who never managed to overcome the demons that haunted him from World War I. But Desmond had the strength to tower above the abuse and violence at home and grew into a man filled with determination, despite the fact that he is soft spoken and somewhat shy, guided strictly by the principles of his Seventh-day Adventist upbringing. 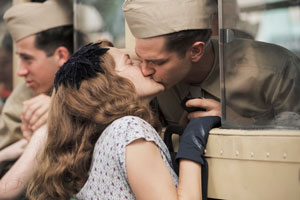 After the attack on Pearl Harbor, Desmond decides to join the army, like his brother. While the move breaks his father’s heart, Desmond feels not only an obligation to his country but to himself to serve. But he faces a series of problems when he refuses to touch a gun during his training. Through a clerical error, Desmond ended up in a rifle company despite the fact that he applied to serve as an conscientious objector to be placed as a medic. His superiors have little sympathy for his objections and use all sorts of intimidating tactics to get Desmond to break and wash out. When nothing works, they decide to court martial him for refusing direct orders, but working in Desmond’s favor, the law is on his side and he is assigned to medical duty.

It is not until they actually enter the theater of war, trying to take Hacksaw Ridge during the Battle of Okinawa, that Desmond’s fellow soldiers begin to appreciate his dedication. The same determination he showed during training, never giving up, now turns him into one of the most heroic figures of battle as he relentlessly returns to the battle field to give wounded warriors first aid and pull them to safety. Driven by the spiritual guidance of his God, Desmond never gives up and constantly tries to save “one more” live, friend and foe alike. 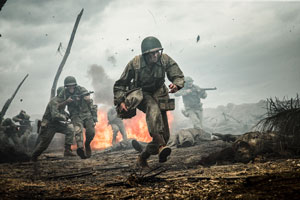 Based on a true story, clearly, Hacksaw Ridge is a story that deserves to be told and one that deserves to be seen. However, the movie is not without its flaws. Extremely violent, it borders almost on video game kind of visuals with oftentimes gratuitously graphic violence—and I am not even referring to the dismemberments, which help heighten the experience and drive the horrors of war home, but of the many splattering bullet wounds that erupt throughout the movie. Equally unrealistic are some of the physics in the movie. Grown men simply do not fly through the air when they are being hit by a bullet and this kind of over-the-top Hollywood physics can really become detrimental to the enjoyment of a movie.

Aside from that, the film is a powerful testament to the human spirit, brought to life masterfully once again by Mel Gibson. Starting out slowly, taking its time to establish Desmond’s character, making sure viewers are fully invested in him, the film switches into furious action mode in its second half. Interestingly, it is in that second part of the film where it shows its true strength because we get to witness Desmond’s struggle first-hand and it becomes evident in very powerful moments what an extraordinary human being he is. In the end, it is an extremely emotional experience, but not in a tear jerker fashion. Instead viewers will be steeped in admiration for Desmond Doss and the unbreakable spirit he possesses. When everyone else retreated, he went the other way! 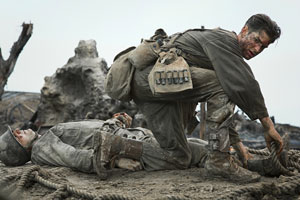 Lionsgate Home Entertainment is typically turning out top notch product and I was utterly surprised to see how poor the presentation of Hacksaw Ridge was on this release. so much so, in fact, that I am wondering if, perhaps, this has been an accident.

The image is riddled with compression artifacts, mostly in the form of banding. The artifacts render faces like flat cartoon images and they render blurry backgrounds into seemingly cell-shaded paintings. I am not exaggerating. That is truly how bad it is. Particularly when images are fairly static they have a tendency to sort of lock into place and have these banding artifacts replace all gradients. It is not not nearly as noticeable during shots that involve a lot of movement, though in those instances, detail is lost dramatically, render the image somewhat soft and blurry. In my opinion, a replacement of the release should be in order to fix these issues and give viewers the experience they paid for. 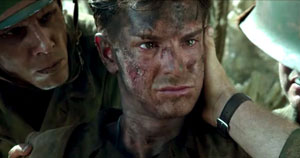 The release also contains a number of bonus features, such as a series of deleted scenes, and a number of featurettes that detail the historical background of the movie, introduce us to the real Desmond Doss, and cover the production.

Hacksaw Ridge is a powerful experience, a truly remarkable story and a great film. With that in mind, I think everyone should see it, but with the technical issues that plague this release, I am not sure I can truly recommend this particular Blu-Ray Disc release of the film.