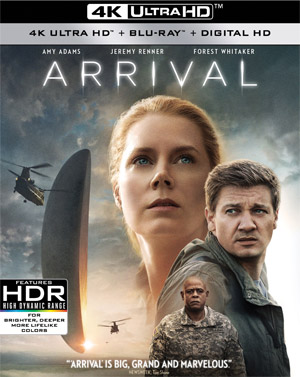 Paramount Home Entertainment has added the science fiction film Arrival to its line-up, scheduling a 4K UHD, Blu-Ray and DVD version of the movie for release in February.

When a number of mysterious spacecraft touch down across the globe, an elite team—led by expert translator Louise Banks (Amy Adams)—races against time to decipher their intent. As tensions mount between fearful governments, Banks discovers the aliens’ true purpose and, to avert global war, takes a chance that could threaten her life, and quite possibly humanity.

The DVD version of the release will feature the movie itself without any bonus materials.

The 4K UHD and Blu-Ray version fare quite a bit better, also containing a handful of Featurettes, covering the making of the movie, such as ”Xenolinguistics: Understanding Arrival,” “Acoustic Signatures: The Sound Design,” “Eternal Recurrence: The Score,” “Nonlinear Thinking: The Editorial Process” and ”Principles of Time, Memory & Language”.