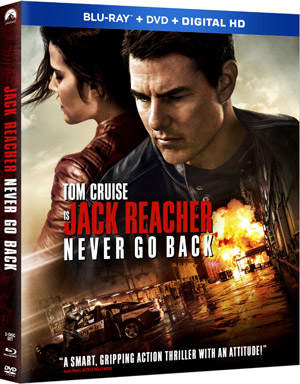 Squeezing in one last hot new announcement just before the holidays, Paramount Home Entertainment has just added the latest Jack Reacher movie to its roster, scheduling Jack Reacher: Never Go Back to make its debut on 4K UHD, Blu-Ray Disc Combo Pack and a DVD version in late January.

Jack Reacher (Tom Cruise) returns to enforce his bold brand of justice in the action-packed sequel based on author Lee Child’s best-selling series. When Army Major Susan Turner (Cobie Smulders) is framed for treason, Reacher discovers she’s the target of a massive government conspiracy. With help from Turner and a mysterious new ally, Reacher risks everything to take down a powerful organization that will stop at nothing to protect its secrets.

The DVD version of the thriller will feature only the movie itself without any bonus features.

The 4K UHD and Blu-Ray Disc version will fare significantly better. Not only will if feature the film with 4K and 1080p high definition presentations, respectively, but it will also feature Dolby Atmos audio tracks and a number of bonus featurettes, such as ”Reacher Returns,” “An Unexpected Family,” “Relentless: On Location in Louisiana,” “Take Your Revenge First: Lethal Combat,” “No Quarter Given: Rooftop Battle” and ”Reacher in Focus: With Tom Cruise and Photographer David James”.

As another cool bonus, the 4K UHD and Blu-Ray combo pack will also include an exclusive Illustrated Jack Reacher Short Story.