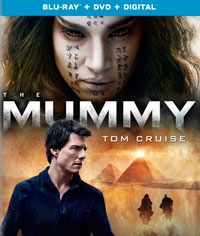 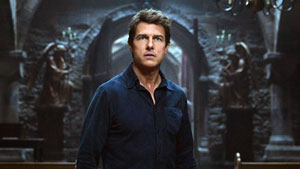 Among the Universal Monsters, the Mummy somehow seems like the least likely candidate you’d think of in terms of popularity. And yet, it is the creature the studio turns to every time the time comes for them to dip their fingers into their legendary pot of gold. Not Dracula, not Frankenstein, not the Wolf Man, not the Invisible Man or the Creature from the Black Lagoon. After a lengthy box office run in the early 2000s that also spawned the Scorpion King spin-off movies, one would have thought the Mummy has been exhausted, but far from it. Universal decided to use the franchise to kick off its Dark Universe—for lack of any comic book legacy, the studio’s response to the Marvel and DC Comic success stories—and instantly, the movie was panned by critics and audiences alike. Now it arrives on Blu-Ray Disc, and being a Universal Monster fan of old, I was eager to take a look myself.

The Mummy tells an entirely different story than previous incarnations. There is no Imhotep, no Ankh-es-en-Amon, no Ardath Bey or any of that sentimental stuff. Instead, we are meeting Nick Morton (Tom Cruise), an opportunistic thief of historical artifacts during the Iraq War, as he accidentally discovers an ancient tomb. Being of Egyptian origin, it intrigues him and by sheer coincidence, he opens the tomb and thus releases Ahmanet (Sofia Boutella), an ancient Egyptian princess who once sold her soul to the god of death, Set, in a bargain for power. She killed her entire family, including her newborn brother, who threatened her ascend to the throne—and thus she was cursed and entombed a living mummy for thousands of years. 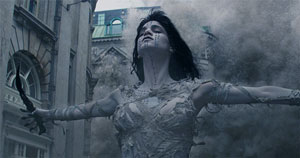 Now, free again, Ahmanet feeds on living humans until she gathers enough strength to wreak havoc once again. Her plan also includes the resurrection of her former lover, but in order to do so, she needs a precious gem to complete the ritual. A race ensues to stop her from ever finding the gem, but with her supernatural powers, Ahmanet clearly has the advantage.

I expected a truly terrible movie and was quite pleasantly surprised that the film was not all that bad. It is no horror movie, by any stretch, and it can hardly be considered a true Universal Monster movie in spirit. It is, as Universal had announced and marketed it, an action adventure. Think of it as The Mummy meets Mission: Impossible and you get the idea.

I suspect that the reason the film was universally panned has to do with that fact. Universal Monster fans wanted to see a monster movie, a horror film, something that hearkens back to the golden days of Universal’s horror legacy. This is not the film. The 2010 revisitation of The Wolf Man was much more Dark Universe than The Mummy is, because, let’s face it, there is nothing “dark” about The Mummy. 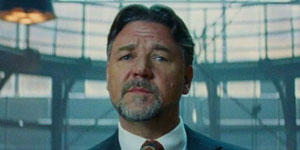 It action plays out in broad daylight almost entirely, the pacing of the film is explosive and features riveting action sequences and stunts that get your adrenaline pumping but never strike a chord with your inner fears, and the antagonist is, while being a monster, never truly mysterious or frightening. Ahmanet is in the way and as viewers, we know she will die in some spectacular action climax.

If you approach the film with an open mind, well aware what to expect, you will find that it works pretty well, actually. Its pacing is good and it never loses momentum, its set pieces are cool and imaginative, the visuals are an orgy of computer-generated imagery, and it’s full of gunplay and explosions. Universal even threw in Dr. Jekyll and Mr. Hyde for good measure. So, in the end, the question how you perceive the film may come down to your mindset. Fans of classic horror, treasuring the original Universal Monsters will clearly be disappointed, while people looking for popcorn entertainment with a lot of bang will revel in this film.

The cast is, perhaps, the movie’s weakest point. Not because they are bad, but because they are predictable. Tom Cruise does what he always does. It seems as if he is playing the same character over and over again these days, regardless of whether he’s called Jack Reacher, Ethan Hunt or Nick Morton. Russell Crowe does what he always does, playing an emotionally detached character with neither the right balance of sympathy or menace for us to care and Sofia Boutella is severely held back by the limitations of her character itself.

And yet, The Mummy manages to entertain and keep you engaged as the events unfold.

Universal is presenting The Mummy in a beautiful 1080p high definition transfer on this release, and the presentation is meticulous. Without blemishes or flaws, it is offering up an incredible amount of detail and texture, while also dishing out vibrant colors. No compression artifacts are evident and the movie’s black levels are deep and solid.

A Dolby Atmos soundtrack accompanies the movie, adding to the bombastic spectacle on the screen with an incredibly aggressive sound mix that makes constant use of the surrounds. Dialogues are well integrated and always understandable.

The release also includes a number of bonus features, most of them short promo featurettes that highlight certain aspects of the production and the characters. A commentary track and an animated graphic novel are also included.

The Mummy took a lot of heat at the box office. Perhaps undeservedly so. It is a popcorn action adventure that works fine as long as you do not expect a revival of the Universal Monsters golden era. Check it out for yourself. You might enjoy it more than you’d expect.