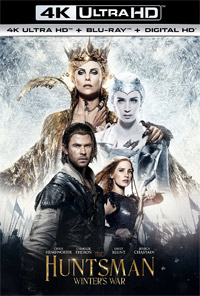 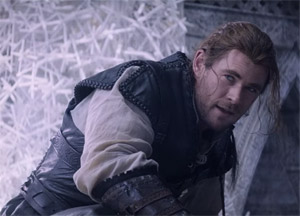 I haven’t been a big fan of the first “Huntsman” movie, “Snow White & The Huntsman, ” because it felt contrived and had nothing going for it but in terms of a story, making the film serving only as a vehicle for its special effects, oftentimes. I was therefore reluctant to see “The Huntsman: Winter’s War,” but when the disc arrived on my desk, I decided nonetheless, to give it a go, especially since Universal decided to let us experience the film in glorious 4K ultra-high definition.

After she has been betrayed by her sister, the evil sorceress, Queen Ravenna (Charlize Theron), Freya (Emily Blunt) retreats deep into the northern mountains and creates an ice kingdom of her own, ruling it with a heartless and icy hand. She builds an army of huntsmen to protect and to fight for her by enslaving the children and training them from an early age. They are soldiers and since the queen’s heart os as icy as her touch, love in the kingdom is forbidden! 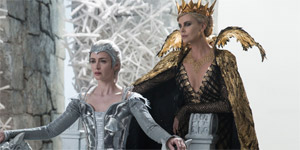 Despite their better judgment, the huntsmen Eric (Chris Hemsworth) and Sara (Jessica Chastain) do fall in love, however, and when Freya finds out, she instantly makes an example of the two. It leaves Eric heartbroken and in hiding from the evil queen. But as the fight between Ravenna and Freya heats up once again following the events from “Snow White & The Huntsman,” Eric finds that he can no longer hide and has to use the opportunity to right the wrongs done to him and everyone around him.

This time, the filmmakers hit all the right notes for me. Feeling much more than a fairy tale than the previous film, the movie has charm and a whimsical quality. Despite its action-laden set pieces, you will find plenty of moments in the film that are warm and inspiring, nicely contrasting with the evil thread that weaves its way through the entire story with its two villains. Moments of wonder give way to moments of pounding action, moments of heartfelt yearning set the tone for greater conflicts.

Part of the reason why the film works much better has also to do with the stronger cast. With Emily blunt as the major villain, the sparks do fly when she collides with her sister, played by Charlize Theron. Jessica Chastain makes for a wonderfully believable and edgy main heroine that perfectly complements Chris Hemsworth’s Eric. Add to it a number of great supporting cast members who really inhabit their parts, and the film is instantly captivating viewers, allowing them to immerse themselves fully in the story. 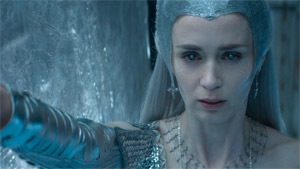 Universal Pictures Home Entertainment has prepared “The Huntsman: Winter’s War” as a wonderful 4k UHD Disc here, giving the film a fitting ultra high definition presentation that is as magnificent as the splendor of the Queens. Whether it’s the golden color-theme of Ravenna’s world, or the icy white and blue tones of Freya’s kingdom, the presentation always strikes the right balance and presents us with a transfer that is rich and luxuriant throughout. Razor sharp at all times, the presentation benefits from the fact, of course, that this is a brand new movie that has been produced largely in the digital realm. Without the need for physical transfers, this encoding, straight from the movie’s original digital source, offers sharpness and level of detail that are unmachted by other traditional media. Every pixel counts, you could say, and every pixel contributes to the glorious presentation put on display in this release. Perfectly smooth gradients and fall-offs make the most of the format’s expanded color depth and with its HDR encoding, the transfer also accommodates the most brutal blacks alongside its perfect white highlights with spectacular bravado, making “The Huntsman: Winter’s War” a wonderful showcase of the new format. 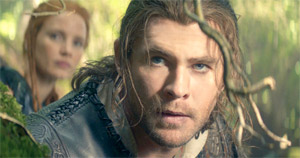 It is best, to also strap in for the film’s ferocious soundtrack. Presented in DTS-X format, which features full three-dimensional positioning of audio sources, the track is not only extremely aggressive when it comes to the use of its surround channels, but it also has a bass extension that brings those low frequencies to live with more than just a subtle roar. Full-bodied and dynamic, the track provides the rails, essentially, for the film to roll on as it takes viewers on the thrill ride. As far as audio goes, presentations like this one, entirely uncompressed, entirely unhampered by traditional sound channel limitations and with a modern mix, are the hallmark of today’s audio and represent a standard that can hardly be improved upon lest humankind begins to grow more sensitive ears.

Naturally, the release also features a number of bonus features, including a commentary track with director Cedric Nicolas-Troyan, in which he talks in some detail about the challenges the production posed, but also the steps necessary to bring his vision to life. 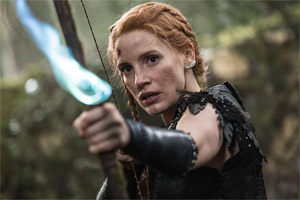 The Blu-Ray Disc that is also part of the package includes the movie in a 1080p transfer, along with a number of additional bonus features, including a gag reel, deleted scenes and a host of featurettes that cover the production.

“The Huntsman: Winter’s War” was a welcome surprise, a film that turned out to be much stronger than expected and that held a lot more redeeming qualities than its bogged-down predecessor. With that in mind, even if you did not like the first film, give “The Huntsman: Winter’s War” a try. You may enjoy it a great deal better, and the magnificent ultra high definition presentation will simply sweep you away.