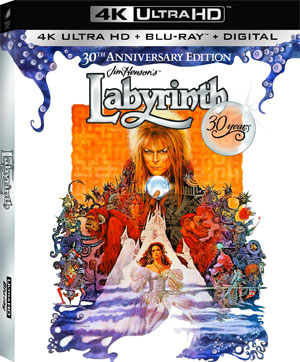 Sony Pictures Home Entertainment has just announced that in order to celebrate the 30th Anniversay of Jim Henson’s beloved movie Labyrinth, the studio will re-release the film for a limited theatrical run, and also release 30th Anniversary Editions on DVD, Blu-Ray and 4K Ultra HD Blu-Ray in September.

“Labyrinth” is presented with an all-new 4K restoration and exclusive Dolby Atmos sound on both the Blu-ray and the 4K Ultra HD releases. The film was fully restored from the 35mm original camera negative, thereby utilizing in 4K the full resolution, detail and color depth inherent in the film.  4K Ultra HD brings the full power of this restoration into the home, featuring four times the resolution of high definition, high dynamic range (HDR)—which produces brilliant highlights, vibrant colors and greater contrast on compatible displays—and Dolby Atmos audio, remixed specifically for the home theater environment, delivering captivating sound that places and moves audio anywhere in the room, including overhead. The Blu-ray will also utilize this new restoration at HD resolution, and an all-new DVD will be available on this date as well.

The “Labyrinth: 30th Anniversary Edition” Blu-ray is loaded with all-new bonus content, which features Jennifer Connelly in one of her first on-camera interviews about the film since its release.

The new special features will take fans behind the scenes at the Center for Puppetry Arts—home to The Jim Henson Collection as well as puppets from the film—and include all-new discussions with the Henson family, and special reflections on working with David Bowie in his iconic role as the Goblin King.

In detail, the DVD version will include the All New Featurette “The Goblin King”, as well as a Commentary Track by Conceptual Designer Brian Froud. Aslo included are the Documentaries “Inside The Labyrinth” and “Journey Through the Labyrinth: Kingdom of Characters” and the movie’s Theatrical Trailer.

On the Blu-Ray and 4K UltraHD versions you will find the All New Featurette “The Henson Legacy” Featurette in which Jennifer Connelly and the Henson family talk about the art of puppetry and the magic of Jim Henson, along with a visit to the “Center for Puppetry Arts” featuring The Jim Henson Collection and over 100 puppets from Labyrinth.
Also included is an All New Labyrinth Anniversary Q&A, hosted by Mythbuster’s Adam Savage with participants Brian Henson, David Goelz and Karen Prell, and surprise guest Sheri Weiser.
Also look out for the All New Featurette “The Goblin King”, remembering David Bowie with co-star Jennifer Connelly, and Jim Henson’s children Brian Henson and Cheryl Henson.
The release will also include previously release bonus features, such as the Picture-in-Picture Track The Storytellers, the Commentary Track by Conceptual Designer Brian Froud, the Documentaries “Inside The Labyrinth”, “Journey Through the Labyrinth: Kingdom of Characters” and “Journey Through the Labyrinth: The Quest for Goblin City” and the movie’s Theatrical Trailer.