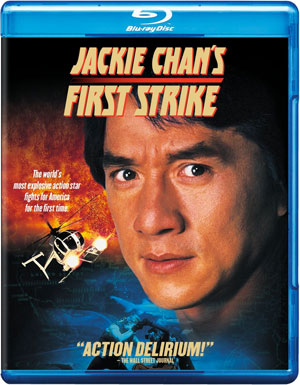 Having control of the New Line catalog, Warner Brothers Home EntertainmentFirst Strike and Rumble in the Bronx to their roster for release in October.

In “Jackie Chan’s First Strike,” a hard-hitting gang has the numbers and weapons on its side. Jackie Chan has what’s within his reach: a ladder. It will do.
Chan’s amazingly inventive and widely famed deployment of a ladder as a weapon (he also uses a broom, stilts, a chair, a shark [!] and anything else that’s handy during the film) is a highlight among highlights in this rollicking action/comedy in which he’s called upon to recover a stolen warhead component. The adventure whisks our hero from high-rise Hong Kong to the
snowy Ukraine to sunny Brisbane – and he plunges into it all with wall-to-wall kickbutt joy. Settle in and watch as Chan and a ladder lift the martial arts to new heights of fun. 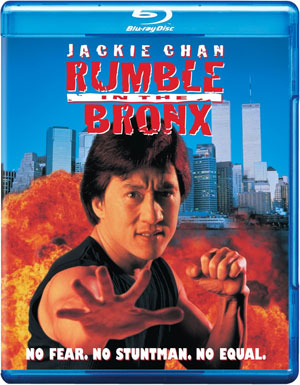 In “Rumble in the Bronx,” you will see why to millions of action fans around the world he’s a living legend. If you’ve never seen him before, you’ve never seen action. He’s Jackie Chan and for years he has done something no other action star would dare dream. He’s performed all of his own stunts. In this action comedy, Jackie Chan becomes the protector of his uncle’s store and his employees, including Anita Mui, against a local street gang who threatens to destroy everything he holds dear.

Unsurprisingly, no bonus materials have been announced for either film, and considering that the previous DVD releases were also altogether without extras, expect to see bare-bones high definition versions here. Unfortunately, from the announcement it is also evident that Warner Brothers Home Entertainment is making the same mistake New Line used to make, and is equally ditching the movies’ original Cantonese language tracks. Therefore, these releases of the films will feature only English and French language tracks, which is kind of unforgivable and shows that studios have still not learned to appreciate foreign films.