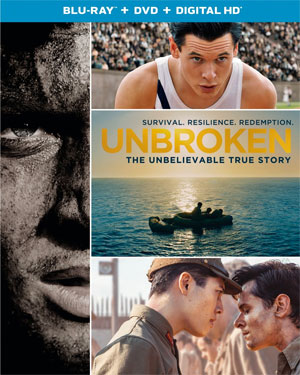 ”Unbroken” follows the incredible life of Olympian and war hero Louis “Louie” Zamperini (Jack O’Connell) who, along with two other crewmen, survived on a raft for 47 days after a near-fatal plane crash in WWII – only to be caught by the Japanese navy and sent to a prisoner-of-war camp. Adapted from Laura Hillenbrand’s (Seabiscuit: An American Legend) enormously popular book, it’s the inspiring true story about the resilient power of the human spirit.

The DVD version will be a straight-forward affair, offering the film, supplemented with the Featurette ”The Real Louis Zamperini”.

The Blu-Ray version is much more impressive by comparison, offering up a 1080p high definition transfer with a Dolby Digital TrueHD Atmos audio track.