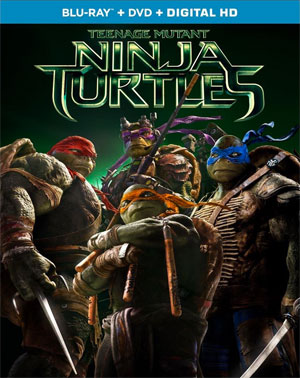 In this eye-popping reimagining of the legendary heroes in a half shell, New York is under attack by the sinister Shredder, but fearless leader Leonardo, brilliant and brainy Donatello, rough and rebellious Raphael and wild and crazy Michelangelo take to the streets to defend their home with the help of intrepid reporter April O’Neil (Megan Fox) and their brilliant sensei, Splinter.  Packed with jaw-dropping action and special effects and loaded with the franchise’s signature humor, “Teenage Mutant Ninja Turtles” is a sure-fire film to ignite home video.

The DVD version of the movie will arrive as a bare-bones release, featuring only the feature film itself.

The Blu-Ray/DVD Combo on the other hand is ripe with supplements. Aside from a 1080p high definition presentation with a English Dolby Atmos track that is 7.1 Dolby TrueHD compatible, the release also contains a number of Featurettes, such as ”Digital Reality,” “In Your Face! The Turtles in 3D,” and “It Ain’t Easy Being Green”.