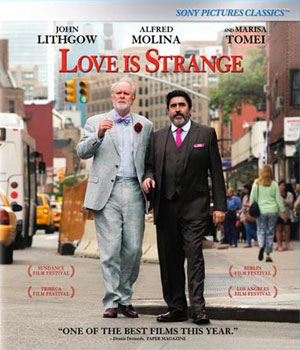 Sony Pictures Home Entertainment has just released information about Love is Strange, scheduling the dramedy for release on Blu-Ray Disc and DVD in January.

Ben (John Lithgow) and George (Alfred Molina) take advantage of New York’s new marriage laws and tie the knot after being together for 39 years. Unfortunately, the Catholic school where George teaches does not approve and they reluctantly fire him, forcing the couple to split up while they sell their apartment and look for cheaper housing. George moves in with two friends (Cheyenne Jackson and Manny Perez) while Ben ends up across town with his nephew (Darren Burrows), his wife (Marisa Tomei) and their teenage son with whom Ben shares a bunk bed. While struggling with the pain of separation, Ben and George are further challenged by the intergenerational tensions and capricious family dynamics of their new living arrangements.

“Love is Strange” will make its debut in stores on January 13.