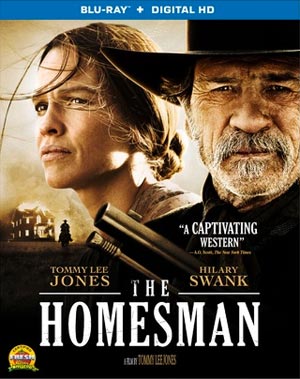 Lionsgate Home Entertainment has added the epic western drama The Homesman, starring Hilary Swank and Meryl Streep alongside Academy Award winner, co-writer, and director Tommy Lee Jones, to its release line-up, scheduling the film for a Blu-Ray and DVD release in February.

Set in 1854 on the harsh Nebraska frontier, low-life drifter George Briggs (Tommy Lee Jones) is rescued by a pious, independent-minded woman named Mary Bee Cuddy (Hilary Swank). To pay back his debt, George reluctantly agrees to help Mary transport three women driven mad by the harsh frontier life across the treacherous land – where a kindly minister’s wife (Meryl Streep) has offered them hospice. The unlikely pair soon realizes just how daunting the journey will be as the group traverses the vast Nebraska Territories, marked by stark beauty, psychological peril and constant danger.

The release will feature the film along with two Featurettes that will offer an insightful look at the life of women in the American west during the 19th century.