No matter how you look at it, an American-made Godzilla film will always end up being polarizing. Having a Godzilla film that relies entirely on CGI to conjure up the iconic kaiju only adds fuel to the discussion, of course.

Evidently fans of the franchise, myself included, were eager to see how this new incarnation of “Godzilla” would turn out, making the film a smash hit at the box office. Now Warner Home Video has released the movie on Blu-Ray Disc and it was time for me to revisit “Godzilla” once again.

Seismic shockwaves hit Japan in 1999, creating quakes that completely destroy the Janjira nuclear power plant. Joe Brody (Bryan Cranston) loses his coworkers and his wife in the disaster, watching her die in a cloud of radioactivity. 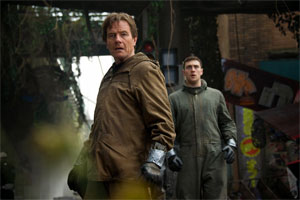 The event haunts him for the rest of his life, and he makes it his mission to find out what really happened. He becomes obsessed with the idea that the shockwaves were not the result of natural seismic shifts—they were to regular for that. Instead, he believes that something else caused the disaster and that the Janjira company is running a major cover up to hide the truth. To prove his point he repeatedly travels into the irradiated power plant to look for clues, and soon he discovers that there is indeed a big cover-up going on, but it is nothing like he had suspected. The cocoon of a giant creature has taken home in the abandoned power plant, and is carefully being studied and guarded by the military and a group of scientists.

But no sooner has Brody discovered the secret, that the cocoon hatches and produces a gigantic alien species that instantly leaves a trail of massive destruction and death in its wake. Unable to stop the enormous creature, mankind has to watch helplessly as the creature crosses oceans and travels continents in search for power to fuel it.

And then Godzilla surfaces in the Pacific, following the trail of the extraterrestrial monster…

I was truly looking forward to the film. I devoured the teasers and trailers, and the early images that were disseminated across the Internet and it held me build confidence in this second American attempt to bring the legendary monster to the big screen. My only real worry was that, perhaps, the film would turn out too gritty and serious for its own sake. But I was not disappointed. I loved the movie. Every minute of it. I found it inspiring, powerful, entertaining and most of all, a worthy entry in the Godzilla legacy.

Now, there have been a great many people did not like the film for a variety of reasons. Some thought it developed too slowly in the first half, others felt the characters were one-dimensional, and others yet complained that Godzilla did not have enough screen time. 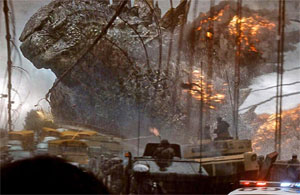 I feel none of that. To me the film is wholly satisfying and right up there with the best Godzilla flicks. I believe the problem stemmed from the fact that suddenly you had many people watch a Godzilla film who were not familiar with the whole kaiju formula, and somehow expected an epic film instead that broke even the well-established Hollywood blockbuster formula.

Complaining about one-dimensional characters? They’ve been a staple since the first Godzilla film in 1954. People are not important in this genre. They are the side show to marvel at the miracle that is Godzilla, or run from him in fear. In fact, the film managed perhaps better than any kaiju film the massive scope of devastation and the accompanying loss of human life. It does not belittle it the way the Japanese films routinely do, but instead tries to pay tribute to it to a certain extent.

Complaining that it took 45-minutes into the film for Godzilla to really be revealed for the first time? Get used to it. That’s how real movies were used to be made, before the age of constant-on, the Internet and cellphones turned mankind into an ADHD-ridden hive mind. Good movies build suspense and then pay it off. the best films in history work that way, from Jaws, to Jurassic Park and, incidentally, virtually every other Godzilla movie ever made.

I won’t go on like this, but suffice it to say that as a long-time Godzilla fa, I felt that the movie took its charge seriously and delivered a film that was in the true spirit of the Godzilla franchise. And in that very spirit, it was not perfect. Didn’t even aspire to be perfect. But it was entertaining as hell!

Staggering viewers with breathtaking CGI, “Godzilla” is following the summer movie format to a T. It lays havoc to entire cities and has riveting action sequences with dramatic set pieces. The destruction of an entire airport, witnessed through the glass windows of the airport’s own waiting area, is one of the visual highlights, operating on the highest level of computer generated imagery. It truly makes you feel as if you are there, witnessing the demolition of everything around you.

But the creature effects, as well as some of the digital background plates and, of course, the battling monsters are incredibly effective and impressive at all times. There is not a single weak CGI shot in the entire movie.

The movie’s cast does a great job, moving the story along and providing some human angle to the story itself. Whether it’s Bryan Cranston’s performance in the powerful opening minutes of the film, the moments of his tortured eremiteism, or the efforts of his son in the later parts of the film, they manage to ground the film and create some emotional response for the audience to relate to.

As you would expect, Warner Home Entertainment is dishing out a first-rate Blu-Ray version on this disc with a transfer that is perfectly clean and devoid of any blemishes. It is a reference transfer in many aspects, as the level of detail in the 1080p high definition presentation is incredibly accurate and renders even finest details with perfection. But it also the presentation’s contrast and black levels that drive the experience home so remarkably. With deep shadows that never lose definition, the transfer gives the picture incredible visual depth, which helps making the scale of the events so much more tangible. Strong colors reproduce the natural palette of the movie with solid hues and with the necessary vibrance to make this a transfer that makes you instantly stop and take notice.

The movie is accompanied by a DTS 7.1 HD Master Audio track that is incredibly aggressive and dynamic. The discrete surround channels are engaged constantly, helping to build ambience at time or to put you truly in the middle of the action. Crumbling buildings around you, swooshing helicopter blades, flying debris, it is all accurately reproduced as it flies through your living room with incredible spatial accuracy. 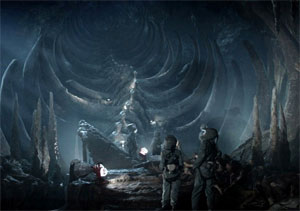 The track’s frequency response is also among the best in the market with a bass extension that will undoubtedly shake your house to its foundation. But even with the incredible rumble track, the high ends of the spectrum remain clean and clear and without distortion, leaving dialogues understandable even during moments of the most heated mayhem.

The movie’s score adds tremendously to the experience of the film. Surprisingly, Akira Ifukube’s iconic leitmotif that was used in all the Japanese Godzilla films, does not make an appearance in this movie. Instead, Alexandre Desplat’s score created new motifs and hooks that serve the movie well. They may not be as memorable but they definitely do justice to the film, as does the rest of the powerful score.

Naturally, a blockbuster like “Godzilla” also comes with a bunch of supplements on the disc. The disc may not be as loaded as one would hope, leaving room for a Special Edition release sometime down the line, but what is there is certainly informative.

In the “Monarch Declassified” section on the disc you will find “Operation: Lucky Dragon,” “Monarch: The M.U.T.O. File” and “The Godzilla Revelation” featurettes that serve as mock archival footage. Faking an investigative news story, they explore the background behind the monsters. This is not behind-the-scenes material but more in line with the footage you see flickering across TV screens in the film.

Production featurettes and interviews on the other hand are found in the “The Legendary Godzilla” section of the disc. “Godzilla: Force of Nature” takes a look at how the filmammkers took something as iconic as Godzilla and tried to give it their own spin without alienating the core audience while at the same updating it with the latest movie making technologies. It is an interesting piece, filled with interviews and a look at the creation of the movie.

“A New Level of Destruction” takes a closer look at the creation of the spectacular effects required to recreated the tsunami, the earthquakes, the crumbling buildings and the general destruction shown in the film. It explains how they have been achieved and what the general approach was to keep them realistic. The same is true for “Into the Void: The HALO Jump,” which turned out to be one of the most visually striking scenes in the film. Director Gareth Edwards and his collaborators explain how they scene came about and how it was trimmed to create the moody feel of a modern day Dante’s Inferno, reminiscent of angels descending into hell.

“Ancient Enemies: The M.U.T.O” is a featurette discussing the other monsters in the film in more detail. How they came about, how they were created, the effects required, and so on.

It is noteworthy, I think, to mention that “Godzilla” does not contain a commentary track of any kind.

To me, “Godzilla” was this summer’s real movie highlight, a movie I had anticipated for two years, and a movie that paid off in spades. It is a powerful tribute to the king of monsters and hopefully a lasting entry in the Godzilla franchise. It may be shallow and have its convenient moments, but on the whole it is a true Godzilla movie at heart, and to me that is what counts. It is what made me become an instant fan of the film. I hope you will too, and this Blu-Ray Disc will make it easy for you to enjoy the behemoth in all of its glory.