As you can tell from our review of “The Patriot”, Columbia Tristar Home Video once again created a DVD that is filled with exciting extras and offers a splendid presentation of the film itself. Covering one of the most important moments in American history, the film takes us back to the Revolutionary War during which farmers were forced to team up in Militias to fight for their freedom. Beautifully shot on location in the Carolinas, the film is a breathtaking action adventure that is filled with moments of humanity and emotion. At the same time it shows us the harshness of war on the battlefield, and comparisons to Mel Gibson’s own “Braveheart” are certainly not too far fetched. Interestingly, both films have spawned the same kind of criticism, not to be historically accurate.

While one could argue how a film that uses fictional characters can be historically accurate anyway, the focus of “The Patriot” and “Braveheart” always lay in its authenticity rather than strict historical accuracy. Mel Gibson, fully aware of the controversy has a rather relaxed stance on the issue. “We’re in the business of making movies, compelling cinematic spectacles,” he told me during a meeting we had recently on the Sony Pictures studio lot where final preparations for the DVD release of “The Patriot” were under way.

As most would agree, in order to create engaging entertainment it is important to take a position and lead the viewer. “The story has to be told with bias otherwise there’s no point telling it,” he explains why in his case, the entertainment value has to take precedence over historic facts. “In the end all this controversy is nothing but a lot of hooh-hah about nothing, just so that some people have something to write about.”

When you look at DVD,  it is almost as good as a film projection
Mel Gibson, DVD fan and addict 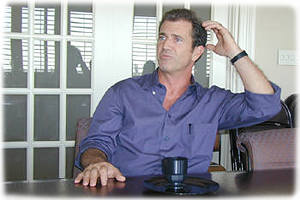 Mel Gibson loves DVD as he reveals during our meeting and incidentally he received his first DVD player in 1997 by none other than Warner Brothers’ own Warren Lieberfab, one of DVD’s biggest proponents and the quasi-father of DVD video. “When you look at DVD, it is almost as good as a film projection,” Gibson enthuses, “even on my 10 foot screen. You have 16×9 enhancement, great sound. And they’re small. Oh, believe me, I’m impressed!” he says energetically.

This love for DVD is also shared by two other members of the “Patriot” team, director Roland Emmerich and producer Dean Devlin. Although Emmerich is a purist who simply loves to watch movies on DVD, Devlin is much more what you would call a fan. Diving deep into bonus materials, getting caught up in commentary tracks and other features, Devlin on the other hand wanted to make sure that the DVD of “The Patriot” offers plenty of the experience alongside the feature presentation. One of the features on the disc is a running length commentary track. 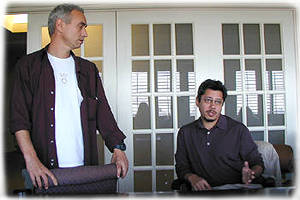 This was the first time we weren’t depressed after doing a commentary track
Dean Devlin, about the extras on “The Patriot”

“We didn’t have a concept when we recorded the commentary,” Emmerich reveals with a big smile. “We were just babbling away.” “Actually, it was the first time we weren’t depressed after doing a commentary track,” Dean Devlin interjects with a witty smile, which obviously was a result of the fact that the film turned out exactly the way they had envisioned it all along. “It was very pleasant,” Emmerich agrees, “and we didn’t try to be too technical in our comments. The commentary is more production specific because I just don’t know how many people are really interested in those technical details, like where you put your lights in a scene.”

The disc also contains a number of deleted scenes, and both Emmerich and Devlin agree that deleted scenes are always a tricky affair. On one hand it gives filmmakers the chance to use scenes they enjoy but had to cut because they didn’t work within the film’s context, while on the other hand, sometimes these scenes have been cut for good reason. In some instances it can even help reinstate actors as Emmerich points out. “Deleted scenes are really useful when an actor comes to you and asks if any of their footage was cut,” he explains. Obviously with a DVD version in hand, now the director can proudly announce, “No, not for the DVD!” even if the footage has been removed from the theatrical cut. “Devon Gummersall is such an example,” Dean Devlin tells me with a laugh. “He finally made it back in the movie—on the “Independence Day” DVD.” 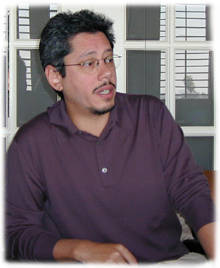 Devon Gummersaul finally made it back in the movie—in the Independence Day DVD
Dean Devlin, about deleted scenes

With all the supplements and special features that we see on many DVD releases these days, Emmerich and Devlin are also happy that it helps create more sophisticated viewers. “Especially with the Internet and DVD, everything is much more accessible,” they say. Especially for young filmmakers, these features are invaluable as they are oftentimes highly educational. “We put a lot of restrictions on our productions and we hold back much of the information at least until the movie is out,” Devlin remarks, but at the same time offers that this secrecy is of less importance once people have seen the film. “Once it’s out, I think it’s another thing to know how it was all done.” “It is much harder to wow people,” Roland Emmerich adds to that, indicating that increased viewer sophistication demands filmmakers to come up with even better ideas, the next time they make movie.

Although Mel Gibson’s involvement in “The Patriot” DVD was limited to a few interview segments in the featurettes, his commentary track on the recent “Braveheart” release was a welcome addition to the release – for both, the audience and Gibson himself. “It was exciting to revisit the film after 5 years and I was just yapping away,” he reports. He wasn’t exactly sure which tone to hit with the commentary track at first. “I was simply going in, watching the film again and spitting out some half-assed verbiage,” he says, explaining that he deliberately tried to be a smart ass to add some entertainment to the track. 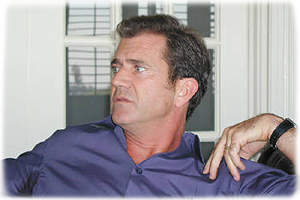 The first cut of Braveheart was 4 hours long, and although we significantly cut it, today I feel it is still too long.
Mel Gibson, about his most ambitious project

“Watching the movie after such a long time was a real surprise,” he adds, “and you just keep thinking to yourself, “What did I do there? What was I thinking?” Since I did “Braveheart,” I have learned so much. How to do things more efficiently, and how to bring down the running time. There is just too much talking in the film that I would do differently today. The first cut of “Braveheart” was over 4 hours long and although we cut it significantly, today I feel it is still too long.”

Much of Mel Gibson’s knowledge about filmmaking comes from his collaboration with Australian directors George Miller and Peter Weir early in his career. “George is the Greek Einstein,” Mel Gibson complements the “Mad Max” director with a big gesture. “He had real flares of genius and I learned a lot from him.” While working with Peter Weir on films like “Gallipolli,” Gibson remembers that he always observed the director to learn about the way he worked. “I was like a sponge and I asked a million questions.” 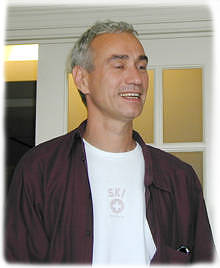 It is much harder to wow people
Roland Emmerich, about viewer sophistication

One thing he has learned the hard way however was the hardship of being the director and star of a movie at the same time. “No more self-directing for me,” he grins. “You are wearing too many hats and it is exhausting,” he remembers his work on “Braveheart,” also remarking that it didn’t allow him to pay enough attention to all aspects of the production, the way he would have liked. “You have to confine yourself and define your parameters,” he explains the drawbacks of this sort of involvement. 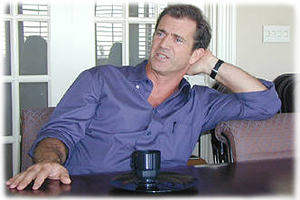 The reason why not many extras were found on the recent release of “Braveheart” may lie in the fact that Mel Gibson is not particularly fond of a wealth of extras. “They always get too earnest on those things and it makes me sick,” he offers quite frankly. As a result of this implicit seriousness, he decided to do something contraire to standard practices. “That’s why I started doing my own making-of documentaries on the “Lethal Weapon” series. They’re kind of a good antidote to your standard making-of stuff.”