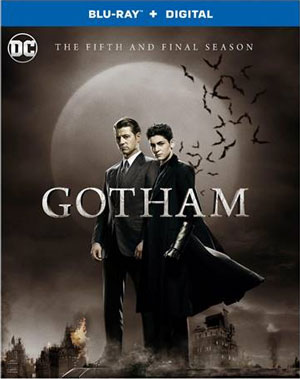 Warner Home Video has just unveiled plans to release Gotham: The Fifth and Final Season this summer, along with a large Gotham: The Complete Series set.
The fifth and final season of Gotham wraps up the iconic series in an unforgettable event that focuses on Bruce Wayne’s ultimate transformation into the Caped Crusader, while Jim Gordon struggles to hold together a city on the edge of chaos. Following the epic events of season four, the Legend of the Dark Knight resumes as Gotham City is divided between Gordon’s GCPD jurisdiction and some of the city’s most notorious villains such as Penguin, The Riddler and more. As the city’s heroes try to gain control and salvage what’s left of the deteriorating city, it teeters between good and evil, even as new DC Super-Villains, including Bane, are introduced.
Aside from the twelve 1-hour episodes that make up the show’s final season, the release will also come with a few bonus features, such as Modern Mythology, allowing you to see, through the eyes of the producers and cast, how the final chapter of the series as the show pushes Bruce Wayne to finally accept his destiny, the mantle of The Dark Knight.
A number of Deleted Scenes will also be included, along with Gotham Season 5: Best Moments at NY Comic Con, 2018, allowing you to join the cast and executive producers of Gotham at New York’s 2018 Comic Con as they discuss the exciting final season of the series.
Gotham: The Fifth and Final Season will make its appearance on June 11 and can be yours for $29.98 as a 2-disc Blu-Ray set or $24.98 as a 3-disc DVD set.
On the same day, Warner will release Gotham: The Complete Series, for $112.99 as an 18-disc Blu-Ray set and for $99.98 as a 26-disc DVD set.