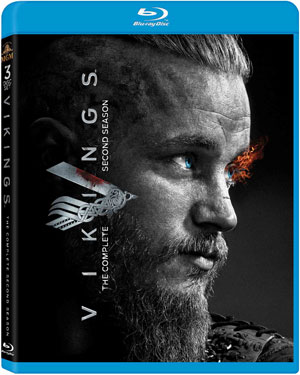 MGM and and Twentieth Century Fox Home Entertainment are ready to let the Ragnar and his wild norsemen invade your living room once again in October, when The Vikings: The Complete Second Season will arrive on Blu-Ray Disc and DVD.

“Vikings” centers on Ragnar (Travis Fimmel), a restless young warrior and family man who longs to find and conquer new lands across the sea and claim the spoils as his own. Now he is an Earl, allied with King Horrik (Donal Logue). With more power than ever before, his desire to sail west and explore new kingdoms remains unquenchable.

Yet there’s a heavy price to pay for Ragnar’s ascent to greatness. Season two brings crises of faith, of power, of relationships. Brothers rise up against one another. Loyalties shift from friend to foe, and unlikely alliances are formed in the name of supremacy. Ragnar’s indiscretions threaten his marriage to Lagertha (Katheryn Winnick), tearing him and his beloved son apart. Plots are hatched, scores are settled, blood is spilled…all under the watchful eyes of the gods.

On the DVD version will find all of the season’s episodes along with the Featurettes ”My Family, My Enemy,” “A Warrior Society: Rites of Passage,” and ”Imagining and Executing Climactic Battles”.

The Blu-Ray version will offer up there bonus materials as well, but supplement the release further by offering ten of the episodes in Unrated versions that contain Extended and Alternate Scenes.

Further, the release will feature Commentary Tracks on the episodes “Blood Eagle” and “The Lord’s Prayer,” featuring Michael Hirst and Gustaf Skarsgard.

In addition, the Blu-Ray version will come with The Viking Sagas, an interactive archival exploration of the Viking Sagas that allows you to hear a detailed deconstruction of the Sagas told by Viking historians.