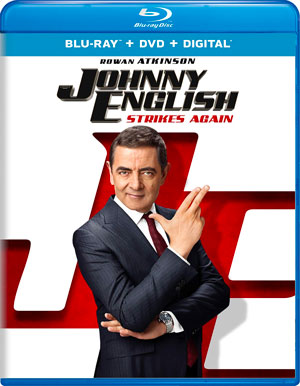 The beloved Rowan Atkinson returns as the much-loved accidental secret agent in the third installment of the hilarious, action-packed spy mission. When a cyber-attack reveals the identity of all active undercover agents in Britain, the country’s only hope is called out of retirement. English’s new mission is his most critical to date: Dive head first into action to find the mastermind hacker. A man with few skills and analog methods, English must overcome the challenges of modern technology—or his newest mission will become the Secret Service’s last.

The release contains a Commentary Track with Director David Kerr, along with a series of Featurettes including The Comedy Genius Of Rowan Atkinson, offering up a look at Rowan’s comedic talents—the meticulous attention to detail that is the hallmark of his work. Johnny English combines the best of Rowan—a skillful use of dialogue and slapstick.

The Johnny English Legacy answers the question, what has changed in the series this time around… for Johnny… and for the world? In this piece, we learn from the cast and film-makers how the character has evolved and what’s changed without changing the core of the incompetent agent we have come to know and love.

Virtual Reality Johnny English Style glances at how virtual reality might be everywhere, but no one does it quite like our intrepid agent English.

In The Gadgets, Rowan leads us through his notable collection of gadgets as the team provides insights into their creation, while in The Cars, we see that the actor is actually a well-known auto enthusiast, and had a big say in the choice of cars used in the film. Olga Kurylenko joins in on the fun and discusses her driving scenes including the differences between shooting for Johnny English 3 and Quantum of Solace.

While the movie may be all about the laughs, , in Locations and Design you get to take a look at the set designs and the locations that are the real deal. From Johnny’s bedroom, to the MI7 and Prime Minister Offices, and Volta’s suite in the castle, every detail is carefully crafted.  And nothing beats shooting on location—from the south of France to the streets of London, Agent English is well-traveled.

The release is rounded out by a closer look at A Cast Of Characters, shing a light on Ben Miller as Bough, Olga Kurylenko as Ophelia, Emma Thompson as the Prime Minister, Michael Gambon as Agent 5, Charles Dance as Agent 7 and Edward Fox as Agent 9.

Johnny English Strikes Again is scheduled for release on January 22 with a $34.98 sticker price on Blu-Ray and a $29.98 price tag for the DVD version.