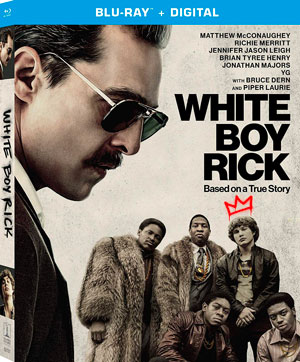 Sony Pictures Home Entertainment has added White Boy Rick to its roster, taking you deep into the corrupt world of 1980s Detroit at the height of the War on Drugs with a Blu-Ray and DVD version that has been scheduled for release in late December.

Set in 1980s Detroit at the height of the crack epidemic and the War on Drugs, White Boy Rick is based on the moving true story of a blue-collar father (Matthew McConaughey) and his teenage son, Rick Wershe Jr. (Richie Merritt), who becomes the youngest FBI informant in history, and later a drug dealer, manipulated by the very system meant to protect him, abandoned by his FBI handlers, and sentenced to life in prison.

Aside from the film itself, the release will also contain a Trivia Track and a handful of Deleted Scenes, along with three behind-the-scenes Featurettes called “The Unknown True Story of Rick Wershe Jr.,” “The Three Tribes of Detroit: The Cast” and “The Making of White Boy Rick”.

Based on a true story, White Boy Rick will arrive in stores on December 25.