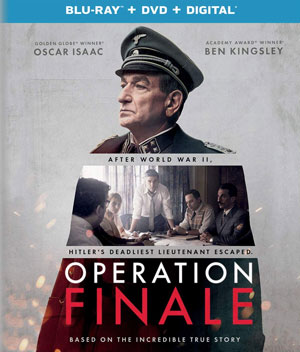 Operation Finale follows the gripping true story of the 1960 covert mission of legendary Israeli intelligence agent Peter Malkin (Oscar Isaac) as his secret mission leads him to infiltrate Argentina and capture Adolf Eichmann (Ben Kingsley), the Nazi officer who masterminded the plans that sent millions of innocent Jews to their deaths in concentration camps during World War II, and bring him to justice.

Filled with suspense and unforgettable moments from start to finish, Operation Finale will also offer up a Feature Commentary with Director Chris Weitz, as well as the Featurette Inside the Operation, in which cast members, filmmakers, and the crew discuss working together, filming in Buenos Aires, and their collective approach to telling such a historically significant story.