“The System of Doctor Tarr and Professor Fether” is not one of the first short stories that comes to mind when thinking of Edgar Allan Poe’s body of work, and yet, it is such a rich and wickedly dark story that it is surprising it has not been picked up and retold more frequently. Fortunately for fans of the master’s work director Brad Anderson found his calling in exactly this short piece of fiction and brings us “Stonehearst Asylum,” which has now made its way to Blu-Ray Disc through Millenium Entertainment. 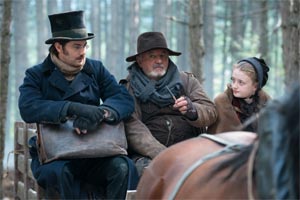 The story begins when recently graduated psychology doctor Edward Newgate (Jim Sturgess) arrives at Stonehearst Asylum, where he plans to study first-hand the methods of treatment he had been hearing about. Upon his arrival he is greeted by Dr. Lamb (Ben Kingsley) who quickly reveals that the asylum has been adopting rather radical forms of treatment, entirely different from the traditional approach Newgate had been taught. Lamb believes in a more humane kind of treatment, where in order to re-socialize patients, one needs to treat them with respect. Instead of discarding them and treating them like one would a broken toy, Dr. Lamb shows them love and patience, allowing the patients to mingle freely with the staff. 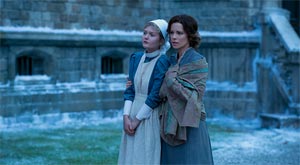 Among these patients, Newgate meets Alice Graves (Kate Beckinsale), a young woman who seems absolutely normal on the surface, but, as a result of extreme domestic abuse, has severe social issues, going into a state of nervous shock every time someone unfamiliar touches her. Instantly, Newgate falls in love with the young woman and desires only to heal her of her affliction.

But it takes him some getting used to these new kinds of treatment at Stonehearst, and soon the aspiring doctor finds that not all is gold that glitters, and that the asylum is also home to a very dark secret! 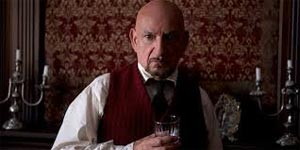 A mystery in the best fashion of Poe’s incredibly sharp pen and mind, “Stonehearst Asylum” does a wonderful job conjuring up the dark corners of the unsettling asylum and its inhabitants alike. Slowly unravelling the mystery, one hint at a time, never allowing the viewer to feel safe in what appears to be real, the movie is marvelously crafted adaptation that captures the style, tone and essence of Poe’s short story, while also elaborating on it in more detail, in order to flesh out the events and characters fit for a feature length film.

Aside from the wonderful script by Joe Gangemi, the film also benefits form its stellar cast. Any movie that features Michael Caine and Ben Kingsley together on the screen, has to be worth seeing, but once you throw in Kate Beckinsale, David Thewlis, Brendan Gleeson and Jim Sturgess, you are really hitting cinematic gold. And gold it is, because if the brooding atmosphere doesn’t get you, the characters and the plot twists will, as it offers surprises even for those familiar with Poe’s original short story. 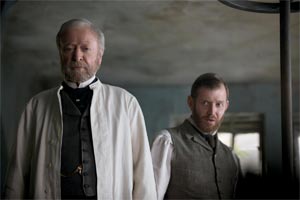 The Blu-Ray Disc offers a magnificent 1080p high definition transfer of the film that is rich with detail. Textures in fabric and skin are meticulously reproduced, while the transfer’s brutal black levels give the image the necessary brooding depth it needs to do justice to the material. Color reproduction is absolutely faithful, bringing to life the gloomy interiors of the asylum with as much bravado as the sunlit scenes, or the snow-covered outdoors.

The audio on the release is presented as a 5.1 channel Dolby Digital TrueHD track. True to form, the release is absolutely clean and clear, without a hint of distortion. Surround usage is very good, creating interiors that are constantly bustling with activity and a wide sound field to accommodate the story. Dialogues are well integrated and always understandable, never drowned out by the sound effects or the music. 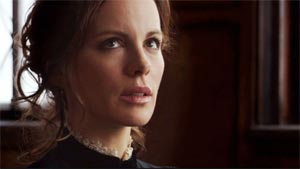 As the only extra, the release contains a 5-minute making-of featurette that offers up interviews with cast and crew members as they discuss the production of the film. It is, in essence, really just a promo featurette without too much inherent value other than extolling the virtues of the movie itself.

“Stonehearst Asylum” is a fresh breath, really, conjuring up an old-school Edgar Allan Poe dark mystery with modern filmmaking sensibilities. It fully succeeds in recreating Poe’s atmosphere without ever feeling outdated or in any way cheap. The film is stylish and atmospheric throughout, with a stellar cast. In all honesty, it makes me wish director Brad Anderson would tackle some more of Poe’s work for movies, much the same way Roger Corman did in the 60s. I truly wonder what Anderson’s adaptation of “The Fall of the House of Usher” would look like… yes, one can dream, I suppose. What I am really trying to say here is, go, get this disc!