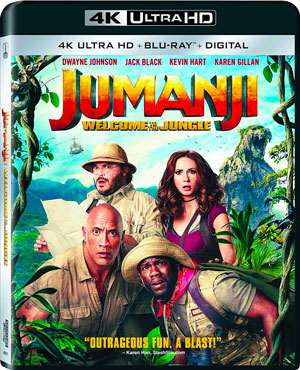 Sony Pictures Home Entertainment has just added Jumanji: Welcome to the Jungle to its line-up, scheduling a 4K UHD, Blu-Ray Disc and DVD version of the action adventure for release in late March.

When four high-school kids discover an old video game console with a game they’ve never heard of—Jumanji—they are immediately drawn into the game’s jungle setting, literally becoming the avatars they chose: gamer Spencer becomes a brawny adventurer (Dwayne Johnson); football jock Fridge loses (in his words) “the top two feet of his body” and becomes an Einstein (Kevin Hart); popular girl Bethany becomes a middle-aged male professor (Jack Black); and wallflower Martha becomes a badass warrior (Karen Gillan). What they discover is that you don’t just play Jumanji—you must survive it. To beat the game and return to the real world, they’ll have to go on the most dangerous adventure of their lives, discover what Alan Parrish left 20 years ago, and change the way they think about themselves—or they’ll be stuck in the game forever…

Aside from the feature film itself, the release also comes with a number of bonus features. The DVD version, for example, will arrive supplemented by the “Jumanji, Jumanji” Music Video by Jack Black and Nick Jonas, as well as a Gag Reel and the Featurettes “Journey Through The Jungle: The Making of Jumanji,” “Meet the Players: A Heroic Cast” and “Attack of the Rhinos!”.

The Blu-Ray Disc version will include the same bonus features but will add a number of Featurettes to the mix, such as “Surviving the Jungle: Spectacular Stunts!” and “Book to Board Game to Big Screen & Beyond! Celebrating The Legacy of Jumanji”.