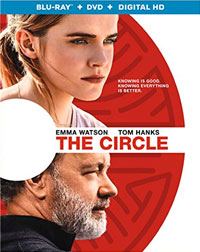 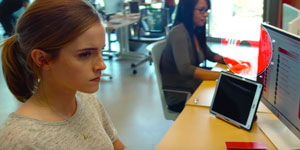 When The Circle hit theaters earlier this year, the movie never truly grabbed my attention. Why? I am not sure. On the one hand, a movie featuring Tom Hanks and Emma Watson in the lead should have gotten me all excited, but at the same time, the trailers didn’t hook me and simply didn’t manage to make the movie all that attractive. To give me, and many others, the chance to experience the movie at home, Lionsgate Home Entertainment has now released a Blu-Ray version of “The Circle,” which I eagerly explored.

Coming off a job that bored her to hell, Mae (Emma Watson) is hired by The Circle, the world’s largest and most powerful high tech company, and for a moment it appears as if a dream came true for her. While the outside world admires the elitist corporate culture of the Circle with is countless perks and seemingly endless opportunities, Mae soon realizes that not all is gold that glitters.

Focused on social media and what it can do for society when employed in certain ways, Mae first notices that the pressure inside the company to conform is brutal. Unless you provide constant social media updates, red flags are triggered, and if you won’t attend at least a modicum of the extracurricular activities the company provides, alarm bells go off. 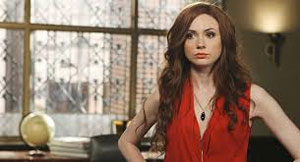 While slightly taken off-guard by the mentality, Mae is eager to fit in and even becomes an advocate for full transparency. It is a concept proposed by the company’s leader Eamon (Tom Hanks). When everyone’s lives are fully transparent, when secrets are no more and lies cannot survive, we will live in a better world, he believes. As Mae learns, this is the ultimate goal of the Circle, and as she gets deeper involved with the exposing and stripping of people’s rights to privacy, she also learns that it comes at a price. A price that, perhaps, too steep to pay.

After viewing “The Circle,” my first reaction was that this was not at all the movie I had expected. The trailers created the impression of a high tech thriller. The movie is none of that. The story, the concept, the motivations are all laid out up front and after the exposition, the movie ultimately becomes a straightforward social commentary. 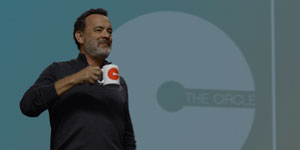 With no mystery and no real dramatic arc, the movie suffers, unfortunately. The moments, where the film shows how giving up our privacy does have real consequences, are not only predictable but rather expected, and barely even scratch the surface of some of the larger-scale threats that could result. And that is the film’s largest shortcoming. It is cute, reveling in the adoration we sometimes have to companies like Google, Apple, Facebook etc. while at the same time questioning their ulterior motives. It is entertaining to see how blasé many people are over the superficiality of social media as if any of it truly mattered, and it is, I guess, important to show those same people that giving up their privacy on a daily basis will come at a price. What it lacks, however, is real depth. A discussion of the dangers that goes beyond the pettiness of not-fitting-in, excessive zeal, and the embarrassment of an exposed sex life.

There are much larger issues at stake, greater in scale, with an effect on the entire world, but at the same time, as our current administration proves, the lack of transparency can be equally dangerous. The strength of the story would have lied in the contrast between these two extremes. Too little transparency versus too much transparency, but sadly, the film does not explore that aspect at all, keeping things as shallow and superficial as people’s Twitter and Instagram feeds.

While it does serve as a thought-provoking exercise, The Circle could have been a whole lot more. It is disappointing that the film squandered the opportunity, that it did not create a plot that truly engages and challenges the viewer’s perception of privacy as we know it and instead opted to lay it all out like a buffet. Without any thinking required, the film feeds you the moral lesson it wants you to walk away with instead of letting people actually reflect on the subject matter and make up their own minds. 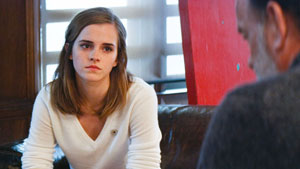 The Blu-Ray version that Lionsgate Home Entertainment has prepared here is flawless in its presentation. The image of the 1080p high definition transfer is incredibly clear and crisp, always maintaining a bright, natural look that never loses detail. Black levels are solid to give the image depth and with its high definition, it manages to capture and reproduce all the little image details, down to individual fibers of texture or even the smallest print on a computer display.

The film boasts a natural and active soundtrack that is filled with surrounds to create a bustling ambiance. It perfectly reflects the restless world of The Circle where no one ever seems to sleep and where life goes on around the clock.

The score by Danny Elfman is one of the highlights of the film, providing a solid mix of whimsical and darker themes to reflect what is going on on the screen, but also in its subtext. Presented as a DTS-HD Master Audio track, it is well balanced with good bass extension and a clear high end.

As bonus features, you will find a four-part featurette on the disc called “No More Secrets,” as well as “The Future Don’t Wait,” which takes a look at the design and the technology portrayed in the movie.

A tribute to actor Bill Paxton is also included on the release, remembering the actor who appeared here in his final role before passing away much too soon earlier this year.

The Circle was entertaining while it lasted. It was not the kind of film I expected and while it raises and explores interesting questions, it does so on a rather predictable and shallow level without ever challenging many of the preconceived notions or awarenesses that every educated person already has, no doubt. There is a reason why we advocate privacy rights, why we advocate net neutrality and why we try to prevent monopolies, and the film illustrates, why that is. Aside from one case study, what it does not really do is explain what will happen if we fail and continue to willingly compromise our privacy on social media and allow companies to break down privacy barriers, well-intentioned or not.