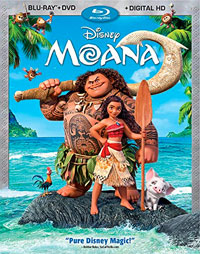 I’ve been filled with some trepidation when it comes to the current crop of Disney animated feature films. Over the past ten-or-so years, they have become entirely formulaic stories that seem to be hatched by an auto-pilot with only one thing in mind—to increase franchisability and to burn themselves into the mindset of children. The days when Disney animations had the depth to also please grown-ups are a mere memory.

It was with this kind of trepidation that I approached Moana. Clearly, the film had beautiful visuals rich with vibrant hues that perfectly fit the Pacific Island story, but one look at Moana instantly reminds you of a stock character that we seem to have seen just a few times too many. But I digress… 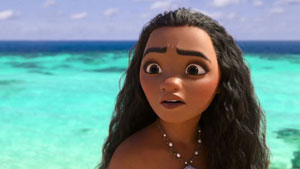 But the young princess Moana is not willing to just give up. Favored by the ocean, she is a firm believer that there is hope beyond the horizon, that she can find Maui, the legendary hero who could lift the curse that has befallen her people. Against her father’s will, Moana sets out on a catamaran to find Maui and rescue her people. But little does she know about life on the open ocean, and she knows even less how to tame an unwilling hero.

As you would expect, the movie lives off the interplay between the sassy Moana (Auli’i Cravalho) and Maui (Dwayne ‘The Rock’ Johnson) who feels he has better things to do than to listen to a little girl without a plan and get himself killed. It is this interaction that truly screams Disney. Situations and dialogues are shallow and predictable, the animations and expressions the same as in any other recent Disney movie and the songs as uninspired as they’ve been for years. Desperation seeps through the songs, in fact, as the filmmakers clearly tried their hardest to reproduce the success of “Let it Go” from “Frozen”—without success. The only saving graces are few Polynesian-inspired tunes and rhythms that give the movie a sense of its own identity, but they are so sparse that one nostalgically longs for the coolness and raucousness of “Lilo & Stitch.” 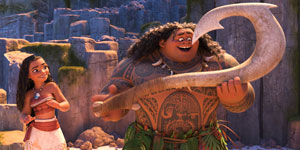 Aside from the forgettable storyline and characterizations, however, there is something about Moana that is not all that bad. It is the sense of adventure the movie offers and the beautiful world and culture of the South-Pacific. It is notable, however, that the film is not truly authentic. It does not tell the story of an actually existing island or myth. It is all fiction and to serve their purpose, the filmmakers have actually pilfered elements from all over the Pacific islands, ranging from Hawai’i to Tahiti, and all the way the Maori cultures of New Zealand. The result is a cultural mishmash that is as enticing as it is stylized.

With the experience and technology of Pixar at their disposal these days, Disney’s animated movies are clearly playing in the major league and Moana is no exception. On a technical level, the images are detailed and lush, vibrant with color and feel always alive. Interesting camera angles, constant movement and amazing visual depth are the hallmarks of these modern animations. Elements, like trees swaying in the wind, and, perhaps most importantly, the water, are marvellously rendered, oftentimes allowing you to forget that you are watching an animation. The storm sequences, are perhaps the true highlight of the film, as wind-pitched waves undulate and crash across the screen. Characters are beautifully animated, even though they do feel like stock characters almost throughout. What the film lacks in true imagination, it makes up for in the technical delivery.

The Blu-Ray disc that Walt Disney Home Entertainment is delivering here is top notch. The image is highly detailed and never loses any image information to compression. The colors are incredibly rich and vibrant, rendering even the most subtle changes in hue with amazing authenticity, creating a true feast for the eyes. The high definition of the transfer makes sure edges and lines are perfectly delineated and with its deep powerful levels, the presentation offers solid shadows and blacks.

The audio presentation is equally impressive with a clean DTS-HD Master Audio track that offers lossless compression and therefore reproduces the original sound mix and spatial imaging of the track without any deterioration. Surround effects are used effectively without ever being excessively aggressive. Instead, they create a dynamic world that is pulsating with life. Dialogues are well integrated and always understandable and the track has a solid bass extension, that provide the audio with a firm root. The contemporary—and therefore anachronistic—musical numbers are mixed the same way modern music is mixed, filling every range of the sonic spectrum with something to give it a sense of layering and loudness.

The release also offers up a series of bonus features, such as deleted songs, along with behind-the-scenes featurettes. Like virtually everything in the movie, most of the supplements are targeted at younger viewers, further nurturing the glamorous celebrity dream that has become Disney’s contemporary recipe to fully commercialize every aspect of its productions. There are, however, also a few production featurettes that do take a look at the actual making of the film and casting a light on some of the visual effects in the film.

All in all, Moana is what you’d expect it to be. Nothing more, nothing less. It is a product of the Disney churn machine. Highly polished entertainment to promote glamor and to feed into commercial desires of its audience. As such it works perfectly and there can be no doubt that it attracts flocks of pre-teen girls into its fold, but at the same time, it lacks heart and feels entirely formulaic and interchangeable, down to the cute animal sidekick. Last time it was Frozen with its cliched songs and characters, this time it’s Moana and in a few years we will have another film that follows in the exact same footsteps, perfectly designed to adorn t-shirts, costumes, princess dolls, and lunch boxes, with a hummable tune that is highly reminiscent of the one that came before. It is what seems to define the Disney Magic these days, and while I did not entirely dislike Moana, I truly wish the studio would put its heart back where it belongs—into the characters they create and the stories they tell.