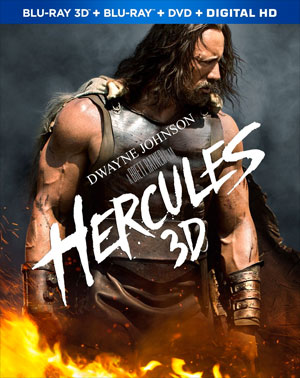 Paramount Home Entertainment has unveiled details about the upcoming release of the epic adventure Hercules, scheduling the film for a Blu-Ray and DVD version in November.

Dwayne “The Rock” Johnson delivers an unforgettable performance as the mighty Hercules in this thrilling story of strength, courage and heroism.  When a terrifying new enemy threatens the innocent, Hercules and his fearless team of warriors must lead their army in a battle against overwhelming odds.

The Blu-Ray version will feature a 1080p high definition transfwre of thew film with a Dolby Atmos audio track that is 7.1 Dolby TrueHD compatible. As extras, the release will contain a Commentary Track by director Brett Ratner and producer Beau Flynn, as well as an Extended Cut of the movie.

An Introduction by Brett Ratner and Dwayne Johnson is also included, as well as 15 Deleted and Extended Scenes. Naturally, the release also contains a number of Featurettes, such as ”Hercules and his Mercenaries”, which delves into the story behind the team assembled by Hercules for his perilous missions and the skills required of them. in ”Weapons!” you can explore the weapons created for the spectacular action scenes, including training with the actors.

Also included is ”The Bessi Battle”, which allows you to discover how one of the major action sequences of the film was created with the filmmakers, actors, stunt team, make-up effects and more. ”The Effects of Hercules” is a behind-the-scenes look at the film’s visual effects.