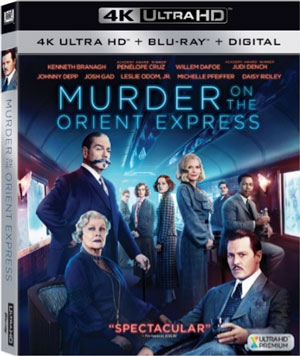 Everyone has a past. Everyone has a secret. Everyone is a suspect, as Kenneth Branagh directs and leads an all-star cast, including Johnny Depp, Michelle Pfeiffer, Penélope Cruz, Judi Dench and Leslie Odom, Jr., in this stylish, suspenseful and thrilling mystery based on the best selling novel by Agatha Christie.

Everyone’s a suspect when a murder is committed on a lavish train ride, and a brilliant detective must race against time to solve the puzzle before the killer strikes again in this timeless classic.

Aside from the film itself, the release will also offer up over 90 minutes worth of bonus features, including a Commentary Track by Kenneth Branagh and Michael Green.

The release also includes eleven Deleted Scenes, also with an optional commentary by Kenneth Branagh and Michael Green, including an Alternate Opening.

A number of Featurettes are also packed onto the release, such as ”Agatha Christie: An Intimate Portrait,” “Let’s Talk About Hercule Poirot,” “Unusual Suspects (Part One, Two and Three),” “The Art of Murder,” “All Aboard: Filming Murder on the Orient Express,” and ”Music of Murder”.

The movie’s Theatrical Trailers and a Still Gallery are also included.

Murder on the Orient Express will be available on February 27 on 4K UHD with a Dolby Atmos audio track and Blu-Ray Disc with a DTS Master Audio track.