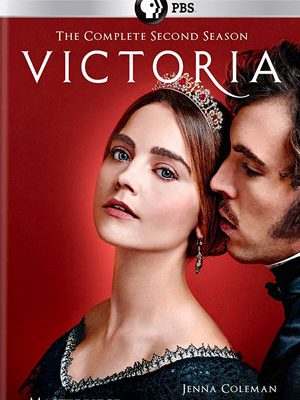 PBS Distribution announced today that it is preparing the Masterpiece television production of Victoria: Season 2 for release in January.

Jenna Coleman returns for a new season as the young queen who wants it all—romance, power, an heir, and personal freedom. Joining the cast in the new season is legendary actress Dame Diana Rigg, who plays the Duchess of Buccleuch, the court’s new Mistress of the Robes—a fount of old-fashioned good sense for the queen, who is now in the throes of motherhood. Tom Hughes is back as the queen’s smoldering consort, Prince Albert, and Rufus Sewell as the enigmatic Lord Melbourne, Victoria’s first Prime Minister and intimate friend. Also returning from last season are Nell Hudson as Nancy Skerrett, newly promoted to the queen’s chief dresser, whose secrets are yet to be revealed, and Ferdinand Kingsley as Charles Francatelli, the royal chef whose love for Nancy was spurned at the end of Season 1.

Season 2 finds Victoria adapting to motherhood after the birth of her first child, a daughter (to the disappointment of many). Meanwhile, the disaster of the Anglo-Afghan War unfolds abroad, and the catastrophic Irish potato famine begins to wreak havoc. In other foreign affairs, a royal state visit to France is in the offing.

Most intriguing to Prince Albert is the budding Industrial Revolution, which is now sweeping England. There is Charles Babbage’s mechanical calculator, a collaborative project with the bewitching Ada Lovelace, daughter of the scandalous Lord Byron. Then there is William Fothergill Cooke’s miraculous electrical telegraph, not to mention Marc Isambard Brunel’s daring—and dangerous—Thames Tunnel.

What an extraordinary time to be queen!