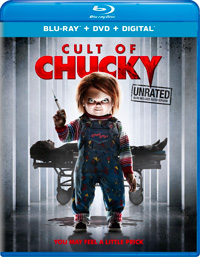 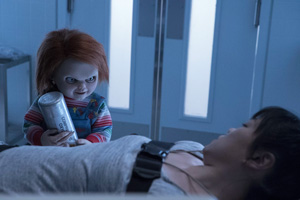 Some toys are made to last forever and like the Energizer bunny, the murderous doll, Chucky, just keeps going and going. Cult of Chucky is the seventh movie in the franchise, bringing creator/writer Don Mancini back to the director’s chair for the third time in a row. As Universal Pictures Home Entertainment has prepared and sent over a Blu-Ray version of the new horror flick, I was eager to revisit the series, eager to see what Mancini has thought up this time.

After the exploits of the previous movie, Nica Pierce (Fiona Dourif) is in a high-security mental facility where she’s been making steady progress in accepting the commonly-held fact that Chucky is just a product of her imagination and that she was, in fact, committing all the horrifying murders. 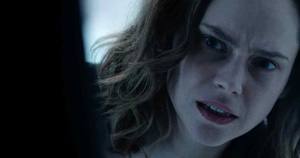 As she is coming to terms with this reality and seems to recover, her doctor (Michael Therriault) is moving her to a minimum security facility where he tries to reintegrate her into social groups. All seems to go well, until, suddenly, Chucky resurfaces and wreaks havoc among the inmates. Naturally, Nica is the main suspect right away, but as patients and staff drop left and right, it becomes increasingly clear that Nica simply cannot be the culprit. But the fact that a doll could be behind the carnage seems just too far-fetched…

It is never easy to create a seventh installment in a series that, by necessity, revolves around the same premise every time. I am glad to say, though, that creator/writer/director Don Mancini did an admirable job here, creating a setting that works perfectly for the story.

Keeping the entire film within a single, expansive location, mostly, helped keep the movie’s budget very moderate without making the film look cheap in any way. In fact, the mental hospital setting is somehow very apropos for a movie like this. It creates a sense of claustrophobia as there is no escaping, it creates weak and helpless victims that are at the whim of a doll, and it offers plenty of tools to arm Chucky with, such as deadly syringes, scalpels, and other medical devices. 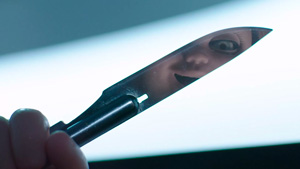 And, what do you do to really crank things up when a killer doll may not be enough to satisfy audiences? You bring in more killer dolls! And that’s exactly what Mancini did to great effect, giving us more Chucky!

The movie features a solid cast, Brad Dourif once again lends his voice to Chucky, like he did in all previous movies, giving the killer doll just the right balance of humor, menace, and acid that made it so iconic in the first place.

He is perfectly complemented by his own daughter Fiona Dourif playing Nica, a character she truly embodies and brings to life, despite the physical disability that ties her character to a wheelchair throughout the movie.

Jennifer Tilly returns for the movie as well, giving it yet another murderous spin and a bit of craziness that mixes things up quite a bit, allowing you to relish in the madness on the screen. 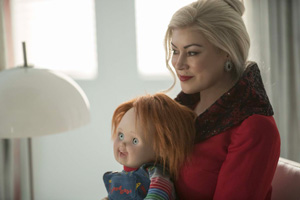 Featuring a solid support cast, the entire production makes the movie work despite its thin premise and somewhat questionable logic, of course, but the franchise, by its very nature, predicates that you abandon logic for a while, simply sit back and enjoy the murderous ride. That’s what Chucky movies have always been about, and this one is no exception.

I was a bit surprised by the amount of gore the film dished out towards the end when things really come to a head. I personally did not care all that much for it because it seemed gratuitous and a bit of a one-trick pony. Especially the Unrated version that is available on this release just adds a bit of extra splatter that pushes it over the edge. Overall, however, the visual effects, as well as the puppeteering are handled in such a way that they add to the film instead of distracting from it. 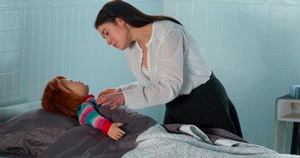 Cult of Chucky is by no means a genre milestone but it is a solid horror entry in a franchise at a point in the series where most other franchises have become agonizingly uninspired. Somehow, Mancini manages to keep us interested in Chucky. It is in part because of the stories, but also because his approach is always daring and imaginative, surprising us with the unexpected in every new film, making us look forward to experiencing it, and the ride itself all the more thrilling and enjoyable.

I had a great time watching Cult of Chucky and if you are on the look-out for a cool Halloween movie, this might just be your ticket.