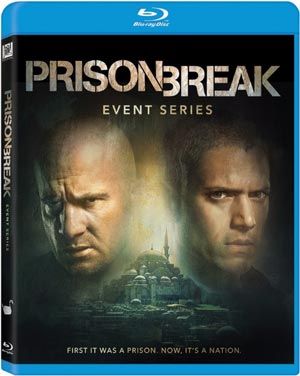 Prison Break returns as a special event series with its most adrenaline-fueled storyline ever! Although he was buried seven years ago, pictures from a Yemen prison reveal that Michael Scofield (Wentworth Miller) may still be alive, which sends shock waves through everyone he knows.

Determined to rescue his brother, Lincoln (Dominic Purcell) enlists C-Note’s (Rockmond Dunbar) help. Meanwhile, Michael’s wife Sara (Sarah Wayne Callies) has remarried. And even if this biggest break-out yet is possible, is Michael the same man he was? Also starring Robert Knepper and Amaury Nolasco, this action-packed series has more plot twists than ever.

The release contains all nine explosive episodes that made up the event series with a DTS 5.1 HD Master Audio track.

Arriving in two versions, the regular Blu-Ray Disc will contain the Making-of Featurette A Return Home.

Additionally, fans can pickup the Prison Break Collector’s Set Blu-Ray version that contains all five seasons of the show along with the Event Series, chronicling Michael and Lincoln’s entire journey. In addition, this version

Additional bonus features on the Collector’s Edition will consist of Audio Commentaries, Alternate & Deleted Scenes, as well as a selection of Featurettes and Interviews.

The Prison Break Event Series Blu-Ray release will be in stores on June 27 for $39.99.