After riding high in season 3, playing all of its muscles, “The Walking Dead” returns for its fourth season, picking up exactly where season 3 left off. Being a fan of the show, I was very eager to take a look at the release and continue my journey into the zombie apocalypse, and when Anchor Bay sent over the Collector’s Edition version of the release, I couldn’t wait to dive in.

The Governor has been defeated and, embracing the survivors from Woodbury, and Rick Grimes (Andrew Lincoln) has been successful in putting the violent nature inside of him to rest—at least for the time being. Inside the prison compound, upon the suggestion of Hershel (Scott Wilson), he took up farming, buried his gun and taught his son Carl (Chandler Riggs) to work the land as well. But the idyll is short-lived, of course, or this would not be “The Walking Dead.”

The first half of the season is dominated by two major events that throw the survivors for a loop. A virus is making its rounds among the survivors, a kind of flu, that they are unable to treat without medication. As members of the team die from the effects of the virus they turn into zombies and suddenly the inside of the prison is no longer a safe haven but a deadly trap. Therefore the group decides to create a special ward and exile everyone with symptoms into it, with only Hershel serving as a doctor, while the others try to scrounge up medication during runs into the surrounding areas.

Needless to say that things happen, and soon enough a new conflict brews as another group of survivors wants to take over the prison. But that only takes through half of the season, because at the halfway point, the show is turning the tables and changes the rules an playfield entirely once again. Firing on all cylinders, very quickly, season 4 of “The Walking Dead” becomes one of the most intense and memorable seasons of all.

I am truly impressed by the show. I was worried that it might get stale after three seasons, but the writers once again dish out surprises and intriguing plot lines that will have you on the edge of your seat. What impresses me the most about the show is how it focuses on the nature of humans as central characters. The zombies are oftentimes merely a sideshow—a very present and gruesome one I admit, but relegated nonetheless—and the true stories are told in the conflict between the people. The darkness in their souls, the way they are haunted by this new world they are living in and the horrific acts they have to commit to survive. Naturally, in a world such as this there is a kind of people who thrive on the lawlessness, who take pleasure in the violence of it all. And with that conflict is born, giving the writers a seemingly bottomless arsenal of tools to work with. And they tend to pick the best and sharpest ones, for that matter. The episode “The Grove” is by far the best and most powerful episode of the entire show in my opinion. It is tragic, sad, horrifying and staggering, all at the same time, exemplifying the engine that drives “The Walking Dead.” This show is not about the zombies. It is about the survivors, and that’s why it remains compelling. It is an examination of human nature, of society, as well as a commentary on the insatiable desires we harbor and the way we interact with each other. It is so much more than you’d ordinarily expect from a zombie flick.

Sporting an exclusive cover image by iconic comic book illustrator Alex Ross in this Collector’s Edition, Anchor Bay Entertainment is giving us season 4 in a five-disc Blu-Ray set here, four of which contain the show’s episodes while the fifth one is filled with bonus materials. The transfer is meticulous and without any defects or blemishes, boasting an incredible level of detail. Textures are remarkable and you won’t miss even the slightest bit of dripping gore or the grime on people’s faces. Edges are razor sharp, yet never overly enhanced and with its bold black level, the transfer has an often frightening amount of shadow detail and visual depth. Without grain, but with strong colors, the transfer is as good as it will ever get.

The audio on the release is once again presented as a Dolby TrueHD 7.1 track that is balanced and has been well integrated. Surround usage is good throughout and makes aggressive use of the split surround channels. A solid bass extension and clean high ends make sure the track is transparent and clean at all times. 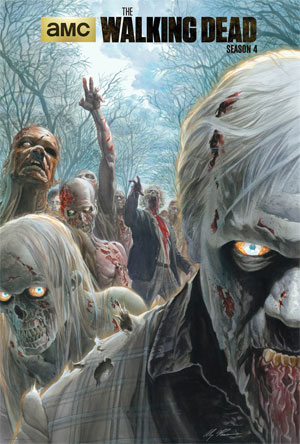 Naturally, “The Walking Dead” comes with a host of bonus materials once again. Five of the episodes are accompanied by commentary tracks which discuss the production process in more detail and also offer some additional insight into character motivations and how it all ties into the overall story arc.

Three of the season’s episodes also offer up extended versions, differing slightly from the original TV versions, and a selection of deleted scenes give you a better impression about additional material the makers of the show had prepared but decided not to use. For the most part it’s short extensions of existing scenes, but there were a few entirely new scenes in the mix as well that were removed because they weren’t relevant enough, I suppose.

In addition, you will find featurettes on other subjects on the release as well, such as “Drawing Inspiration,” which explores how the show uses the graphic novels as an inspiration for the production, oftentimes down to the level of recreating panels from the comic for the TV screen.

Focussing on the characters of Hershel and the Governor, the set also contains featurettes for each of them, exploring the characters and their impact on, and relevance for, the overall story in more detail. “A Journey Back To Brutality” also gives you a closer look at the emotional transformation we see in the show’s main character Rick Grimes this season.

Of course you will also get a look into the KNB EFX workshop once again, as Greg Nicotero and his crew discuss the making of the zombie make-up and the various props they built for the show and how they achieved some of the more spectacular effects. 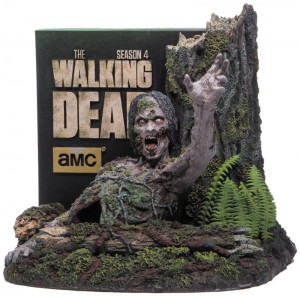 “Society, Science & Survival” is a short segment about a program, pioneered by UC Irvine, in which professors actually used the show to teach behavior and development of societies, showing how the things we see on the screen can be directly witnessed in comparable real world scenarios.

“The Walking Dead: Season 4” is once again a complete winner. Unlike some of my favorite shows of the past years, which have derailed and lost their core focus and appeal – “Game of Thrones” comes to mind, as well as “Boardwalk Empire” – this show keeps getting stronger with each new season. Instead of simply refactoring the same tropes, “The Walking Dead” always makes sure, it turns a fresh stone and surprises viewers with an aspect of the show they have not yet seen before. Whether it is Michonne’s backstory, which is elaborated upon in the season, or the change we see in Daryl Dixon, down to the dramatic turn of events halfway through the season and the suspense-filled season finale, “The Walking Dead” is always making sure it’s never brainlessly shambling along. Instead it sets the bar higher every single time!