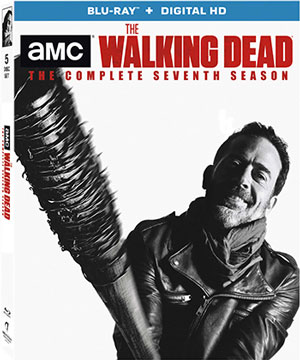 Lionsgate Home Entertainment and Anchor Bay Entertainment have just announced the upcoming release of The Walking Dead: The Complete Seventh Season, scheduling the Blu-Ray and DVD sets for late August.

Picking up immediately after the thrilling cliffhanger, Negan forces Rick and the group to fall under his will, brutally convincing them to live by his rules. To prevent further bloodshed, Rick genuinely believes they can make life under Negan, however terrible, work. But he soon learns that Negan can’t be reasoned with, and they must prepare to go to war now. Victory will require more than Alexandria, and Rick will need to convince their new allies from the Kingdom and Hilltop to band together with the common goal of taking down Negan and his army.

The 5-disc release will feature a host of bonus materials, along side wit hall the episodes that make up this controversial seventh season. Front and center are a selection of Audio Commentaries on select episodes, as well as a number of Deleted & Alternate Scenes.