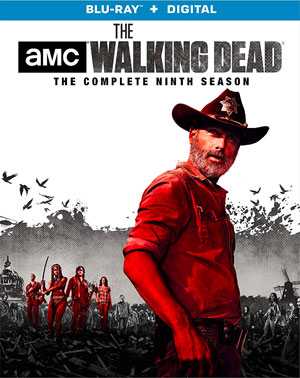 Lionsgate Home Entertainment has just unveiled details about the upcoming release of The Walking Dead: The Complete Ninth Season, bringing the television show to DVD and Blu-Ray Disc in late August.

Last season brought the culmination of “All Out War,” which pitted Rick Grimes and his group of survivors against the Saviors and their leader, Negan. With Negan’s life in his hands, Rick had a character-defining choice in front of him, and he spared Negan to uphold the values his late son, Carl, championed – values that created conflict within his group. Now, with our survivors rebuilding civilization under Rick’s leadership a year and a half after the end of the war, it’s a time of relative peace among the communities. However, the world they knew is rapidly changing, nature is literally taking over, and, as time passes, the communities confront unexpected obstacles and danger. But nothing can prepare them for the formidable force they’re about to encounter, threatening the very idea of civilization our survivors have worked so hard to build.

The release will feature all episodes that make up the show’s ninth season, along with a host of supplements that include Deleted Scenes and a Bonus Scene for Episode 908. The meat of the bonus features will be the many Featurettes, however, covering aspects such has “Seasons Change,” “In Memoriam,” “The Whisperers: Behind the Mask,”
“Rick Farewell,” and “Time Jump”.
In addition every episode on the release will have its own “Inside Episode …” Featurette, as well as its own “Making of …” Featurette.

The Walking Dead: The Complete Ninth Season will shamble to stores on August 20 with a $70.98 sticker price for the DVD version and a $80.99 price tag for the Blu-Ray Disc set.