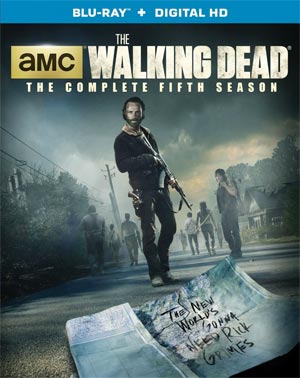 Anchor Bay Entertainment has added the next chapter of zombies, The Walking Dead: The Complete Fifth Season, to its line-up, scheduling the acclaimed AMC television show for release on Blu-Ray Disc and DVD in late August, along with a unique McFarlane Toy Collector’s Edition.

Five years ago, a man awoke from a coma in a hospital. For sheriff’s deputy Rick Grimes (Andrew Lincoln), what should have been a cause of celebration became the flash point for five years of unceasing horror, unrelenting personal sacrifice…and one of the most popular TV shows ever broadcast.

Arriving on August 25 you can own “The Walking Dead: The Complete Fifth Season” on Blu-Ray Disc for $79.99 on Blu-Ray Disc of $69.98 on DVD. A special Collector’s Edition, with packaging created by McFarlane Toys will also be available once again.