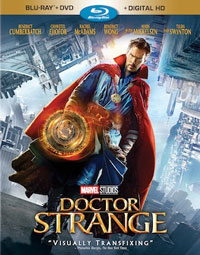 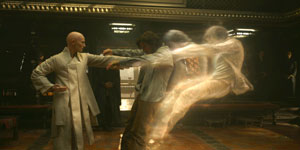 It always amazes me to see how Marvel has almost reinvented itself and has managed to become one of the largest providers of blockbuster movies. No longer do they provide mere comic books to their fans, but they are exploring their entire universe in big budget movies, adding to the lore and bringing to the limelight even smaller, unknown characters of their colorful universe. Doctor Strange is one such candidate. A character that does not nearly have the same notoriety as superheroes such as Iron Man, Captain America or Thor. But don’t let apparent familiarity or the lack thereof mislead you, because Doctor Strange is a powerhouse of a movie that easily ranks among the most imaginative of all Marvel films to date.

Dr. Stephen Strange (Benedict Cumberbatch) is a world-renown surgeon. At the top of his game, he does surgeries that other doctors have already written off entirely. But his success went to his head and his cocky personality doesn’t sit well with everyone.

One night, Strange has a car accident that completely mangles his hands. While surgeons manage to put his bones and tissue back in place, the nerve damage is severe, leaving him with perpetually shaky, unable to perform even the simplest motoric manual functions. Naturally, Strange blames his neuro-surgeon and begins to search for doctors who might be able to rectify the situation but everyone is turning him down. The damage in his hands is irreversible and his career at an end. 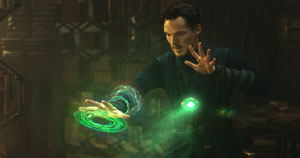 That’s when he hears about one of his former patients, Jonathan Pangborn (Benjamin Bratt) who miraculously recovered from a spinal injury that had left him paralyzed. Unwilling to believe the stories, he goes to see for himself and realizes hat the stories are true. Could this be his salvation, too? Pangborn tells him that Kamar-Taj is where he found healing, setting Strange on a quest to find this mythical location in the heart of Nepal. But when gets there, it is nothing like he expected… and yet, everything he needed. A place where mystic arts are real and, under the guidance of the Ancient One (Tilda Swinton), acolytes are learning to channel forces and energies that are not of this world. The only problem? The Ancient One refuses to teach Doctor Strange.

To call Doctor Strange colorful is an understatement. The film is kaleidoscopic, in many ways, and it is what makes it as extraordinary as it is. Everything is covered in facets, colors, reality, emotions, you name it. At the same time, everything is proving to have shades, of color, reality, and emotions. It makes the movie an incredible experience that could easily have gone off the rail and end up as a purely psychedelic experiment. Instead, under the direction of Scott Derrickson, the film becomes a riveting adventure that is much more quest than trip. 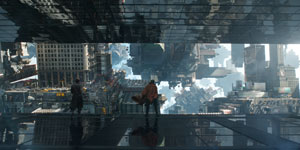 Loaded with eye-popping special effects and mind-boggling reality distortions, the film always stays real enough to be taken seriously and grounded enough to work. The characters and the world may come straight off the pages of a comic book, but on the big screen, you never allow yourself to think of it as two-dimensional or silly. The story is so dense and its fabric spun so intricately that it is a true joyride from beginning to end. Especially with Iron Man seemingly relegated to mere Avengers appearances, Doctor Strange, to me, has instantly become the most iconic character in Marvel’s staple. It is so vastly different and exciting from traditional superheroes like Thor, Captain America or the Hulk and the story so incredibly imaginative that it has catapulted the good doctor to instant cinema super-stardom.

Gushing testimony, I know, but in all honesty, I found “Doctor Strange” truly magnetic to behold. A mix of Eastern mythologies and Western superhero lore that throws formulae in the wind and goes for the jugular, full-tilt. What’s not to like?

After his initial iconic Sherlock Holmes portrayal, Benedict Cumberbatch quickly rose to international stardom, and for god reason. While he tends to play a certain type of character, namely the abrasive, stuck-up know-it-all, the thing about his performances is that he plays them all to the hilt. As ego-centric as his characters may be, he always manages to infuse them with sensibility and creates a likable side to them in such a way that you simply want to watch him. 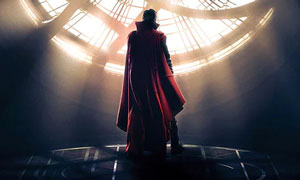 Cumberbatch is surrounded by a great supporting cast that includes Tilda Swinton, Chiwetel Ejiofor, Rachel McAdams,
Mads Mikkelsen, Benedict Wong, and others, all of whom add to the rich tapestry of the film, particularly as every one of their characters adds a unique sense of humor to the mix aside from their dramatic roles in the overall arc.
That, incidentally, is also one of the film’s strengths. Marvel movies are known for not taking themselves too seriously. Whether it’s Tony Stark’s quips, or the involuntarily comic remarks of Thor, there is no shortage of humor to lighten up the action in these films. Doctor Strange is not exception. It is ripe with absurdly humorous moments and one-liners that never feel stilted or forced.

Marvel Studios and Walt Disney Home Entertainment have done a marvelous job bringing this blockbuster to Blu-Ray disc. The transfer is incredibly rich with colors that keep the screen awash in the most vibrant hues imaginable. It truly makes me long for a 4K UHD version of the film, though, admittedly, the 1080p transfer on this Blu-Ray Disc is every bit as incredible as it should be. The level of detail is also remarkable, allowing you to see every detail in the textures and the production design while the rock solid black levels provide the image with visual depth and shadow detail that never breaks up.

The release rocks a DTS 7.1 HD Master Audio track that perfectly complements the film. With powerful surrounds that will explode from every corner of your room and a well-balanced mix, the track is modern-sounding, yet never overly exaggerated. Dialogues are well integrated and always understandable and with its deep bass extension, the track provides the necessary energy to shake the roof off your house. 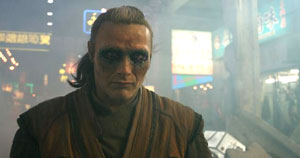 Packed with bonus features, Doctor Strange also provides plenty of material to go behind the scenes of the production. Covering a wide variety of aspects, including a close look at the sets, the visual effects, the cast and characters of the film and many others. It also contains a funny blooper reel and a Thor clip called Team Thor: Part 2, among other things.

Doctor Strange is a heck of a thrill ride, all fun, all action, all marvellous and all pure adrenaline, not to mention mind-bending and utterly satisfying.

The quality of the movie, combined with the technical merits of the release make Doctor Strange a true showcase on every level, so do not miss the opportunity the experience this bombastic movie from the Marvel universe.