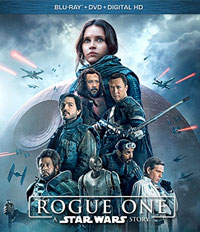 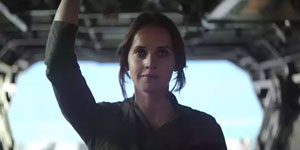 Since Walt Disney took over Lucasfilm and with it, the Star Wars franchise, there has been a lot of movement in the universe and a number of new projects have gone into development. While at first, people were very skeptical, it becomes increasingly clear that the franchise is in much better hands than fans initially expected.

With Rogue One, the studio delivers a movie that is somewhat detached from the narrative of the main Star Wars plot line, yet at the same time, it is an integral part of the fabric of that universe. A small little tidbit from George Lucas’ initial Star Wars movie, A New Hope, is at the heart of this story. Where did the plans for the Death Star come from that Princess Leia is sending to the rebel base with the help of R2D2? 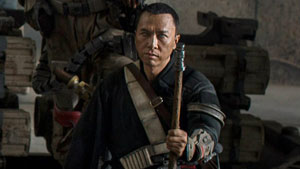 And exactly that is the story of Rogue One. It follows a small group of rebels as they learn of the existence of the Death Star and its built-in vulnerability. The motley crew of unlikely heroes, among them a blind Jedi (Donnie Yen), a deserter (Riz Ahmed) from the Empire and the daughter (Felicity Jones) of a potential Empire spy (Mads Mikkelsen), set out to obtain the blueprints of the Death Star so that the Rebel Alliance can find a way to destroy it.

Filled with all the hallmarks that make a good Star Wars story, I found that since the original trilogy, Rogue One is perhaps the most faithful and engaging of all the Star Wars movies. It is a rip-roaring space adventure where Star Cruisers dominate the space between planets, where X-Wing and TIE Fighters chase each other in dogfights and where Darth Vader, at the height of his power, is strangling people with the sheer force of his will. 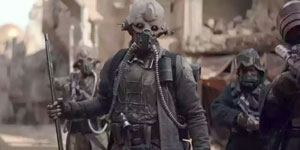 This is not a colorful journey to strange planets with imaginative and colorful flora and fauna, and even more colorful inhabitants or underwater cities. This is not a story of palace intrigue or the ascent of the Force. This film is the glue that made Star Wars such an iconoclastic experience for generations. It is a clash between good and evil, starkly painted and delineated in every frame. It is a world of danger and action, where heroes emerge from the smoldering remains of downed spaceships, and, perhaps most importantly, it is the story of characters.

This aspect is, perhaps, something the recent Star Wars movies have been missing so sorely. Characters to really latch on to. A Han Solo kind of character, a dude like Chewy, an unlikely hero like Luke Skywalker, and of course, the ominous dark presence and threat of Darth Vader. 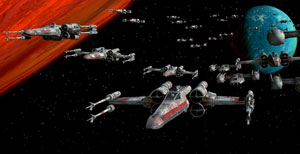 Rogue One has all that. In spates. And more…

There are no cute little characters for comic relief. The one funny character that is there, the droid K-2SO, has such a deadpan sense of humor that it never feels artificial. There are no opulent indulgences, Jedi Councils or backstories to fill in the lore of the universe. Rogue One is taut and to the point and that is what makes it so wonderful.

In addition, Rogue One does not have the plastic look that many of the later Star Wars movies had. You never have the impression that actors are struggling in front of a green screen in a desperate attempt to infuse some emotion into dead lines of dialogue and an environment of artifice. In this film, everything fits together. Visual effects serve the movie, not themselves, and the cast has chemistry and has perfectly adapted to the challenges of modern day filmmaking. As a result, they never feel like live-action pastiches dropped into an animated movie but instead are part of a coherent, overall one. 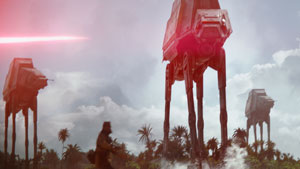 Lucasfilm is presenting a stellar transfer of the movie on this Blu-Ray release that makes one wish only for a 4K UHD edition. It is a picture perfect transfer that is so incredibly detailed and finely delineated that it has instantly gone to the top of my heap for reference discs.There is not a single flaw to be found. Every bit of image information is perfectly retained and reproduced and the image is bold with deep, solid blacks and rich with vibrant colors. Following the roughed-up look of the original trilogy, colors are somewhat muted by design at times to create the gritty world, but it never throws off the color balance. Skin tones are absolutely faithful at all times and the overall presentation is without any blemishes or flaws.

The Star Wars movies have always defined the high bar of theater audio experience and in Rogue One, viewers can expect no less. Presented as a DTS-HD 7.1 Master Audio track, the audio on this release is as bombastic, as it is ballistic. Surrounds are constantly engaged and will attack the viewer’s senses from all directions, front, back and the sides. The solid bass extension gives the track plenty of power to hammer home the explosive sequences of the story, as well as some of the ambient noises to great effect. Dialogues are perfectly integrated and are never drowned out by the effects. 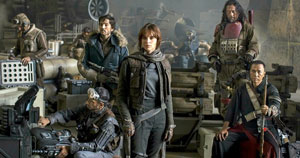 The music of Star Wars has been every bit as iconic as the movies themselves, thanks to John Williams’ amazing string of scores over the decades. For the first time in Star Wars history, a different composer has tackled the challenge and with Michael Giacchino, the filmmakers have put an experienced composer in the driver’s seat who has all the experience, and the portfolio, to make the music of Rogue One as memorable as Williams did in the past. And he succeeds. Without reverting to established themes of old, with the exception of the Imperial March to enhance Darth Vader’s presence, Giacchino breathes new life into the Star Wars universe with a slightly different sound and modern themes that remind us of Star Wars, yet never truly copy from the established motifs.

Aside from the feature film, the release also offers up a number of bonus features in the form of promo featurettes. While the bullet list of featurettes looks impressive, in reality, these featurettes are short little pieces that do not hold a lot of informational value and do not really dig all that deep into their respective subject matters. They are nice fluff around a solid presentation, but for true fans of the franchise and for real movie lovers, there simply isn’t enough meat on them. 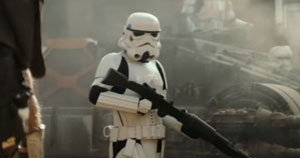 Rogue One: A Star Wars Story was a truly surprising success. The filmmakers, under the direction of Gareth Edwards, have finally nailed the essence of Star Wars and turned out a movie that fits perfectly within the context of the original trilogy. The look, the design, the storytelling, the characters, all mesh perfectly with the original adventures and one can only hope that now that they’ve finally found their way back to the “real” formula, Lucasfilm will manage to hold on to it and continue with the same single-minded focus that makes this film so spectacular.

If you have not seen Rogue One yet, you owe it to yourself to grab a copy today. If you have seen it, you will already know what a true gem this movie is and you probably already have your own copy in hand. May the Force be with you!